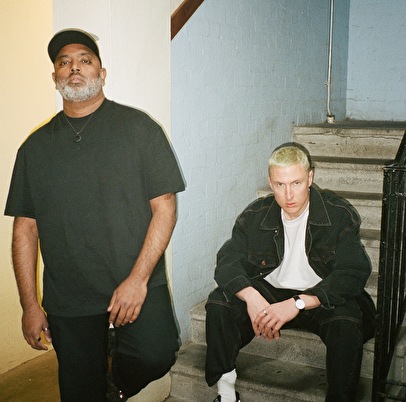 The middle of the noughties saw collective-elder Gove Kidao build up a sustained presence as a Producer/DJ operating under the name Sabre, working on disparate interpretations of the drum and bass genre for labels ranging from Renegade Hardware to Metalheadz to Darkestral. In 2009 Critical Music served not only as the home for Sabre's debut long player, but also the debut track from an unknown young talent advocated by Sabre to the label. J Fogel a.k.a Stray enjoyed broad acclaim for his inaugural release 'Timbre", and began to work on further projects for Critical Music, including collaborating with Sabre himself. Unknown to them both, each had independently struck up a relationship with another emerging talent operating under the moniker Halogenix. Collaborating as separate duos soon expanded into combining into a formal trio, casting the foundations of the collective that exists today.

A string of standout singles and E.Ps for their principle label-partner Critical music with tracks like 'Live on your smile" and '20 Questions" have followed up on the groups melancholic, acid-tinged strand first showcased in the anthemic single 'Oblique" that initially brought the trio into the limelight. Additional support has come in the form of Goldie's Metalheadz recordings with the release of 'Make it Clear" and a string of remixes for acts and labels including Sub Focus (Universal), TC (3beat) and Anushka (Brownwood). With a secure reputation as purveyors of thoughtful, melodic drum'n'bass now affirmed, the group have increasingly been turning their attention to experiments in cross-pollination. The collective now find themselves heavily invested in the movement operating under the stop-gap monicker of 'Halftime' - A motley assortment of actors from across the bass music landscape applying their sonic-heritage to experiments with hip-hop and drum machine electronica. 2014 saw the birth of '2020'. Initially a London clubnight set up to act as a home for the halftime movement, the project is expanding to encompass a record label, 2020 clubnight appearances across the U.K, and the inclusion of a broader collective of artists both established and emerging.

By no means has the scope of the Ivy Lab venture put an end to solo endeavours from the collective's members. Stray has progressed to amass an impressive catalogue of music including work for Giles Peterson's Brownswood label, and a remix commission for Mercury award nominee Kate Tempest. Perhaps his most celebrated projects have arrived under the stewardship of dBridge's Exit Records who have released several stand-out EP's with tracks such as 'Eazy Boy" & 'Matchsticks" garnering particular attention for their early-adoption of themes that have gone on to codify the 'Halftime' movement. Halogenix is the most recent of the collective to establish a solo presence. 2014 saw a notable upscaling in ambition commencing with 'Her Waves" featuring on Critical Music followed by his most impressive project to date in the form of the 'All Blue" E.P on Goldie's Metalheadz record label.

Ivy Lab head into the horizon not only with an anchored presence at the heart of the drum and bass landscape, but also a secured reputation as pioneers helping to develop the destiny of a newly enfranchised movement.