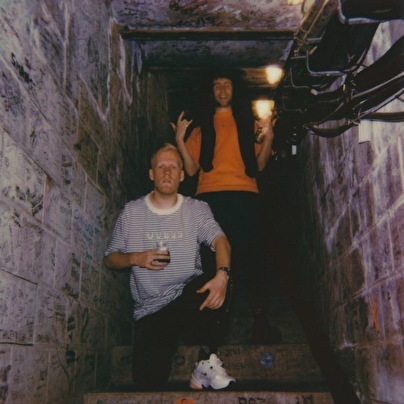 "We love the vibe of 90s music – Hi-Tek, Pete Rock, that golden era of R&B with singers like Aaliyah and SWV," says James. "We're suckers for anything with cool soul samples and old drum beats. But we're also influenced by living in London. We borrow from the past to make music for the future."
→ lees meer
Snakehips rapidly made their name with Hype Machine chart-topping remixes for Banks, The Weeknd, Bondax and Wild Belle. Earlier this year, the duo also released their 4-track EP 'Forever (Pt II)', featuring a several talented vocalists - Londoner Kaleem Taylor, The Internet's Syd, singer-songwriter Sasha Keable and Daniella T.A.O.L. The result is a perfect example of Snakehips' signature sound; a sensual, contemporary take on old school R&B and hip hop.

"We love the vibe of 90s music – Hi-Tek, Pete Rock, that golden era of R&B with singers like Aaliyah and SWV," says James. "We're suckers for anything with cool soul samples and old drum beats. But we're also influenced by living in London. We borrow from the past to make music for the future."

The pair's first release was a remix of Chicago band Wild Belle's 'It's Too Late'; their next, a remix of 'Gold' by electronic duo Bondax. Both used only the original vocal, topped the Hype Machine chart and revealed Snakehips' love of '90s hip hop, disco and vintage soul. Then, in 2013, Snakehips heard Banks' song 'Warm Water' and loved it so much that they contacted her personally, asking to remix it. She sent the acapella, they added their touch and soon had another blog hit on their hands, consequently being asked to rework The Weeknd's 'Wanderlust' as a reward for their endeavours. After The Weeknd tweeted his praise, their remix amassed over 1.5 million plays in less than a month.

The reaction to their own music, however, was in a different league. The lush and sultry 'On & On', featuring up-and-coming Australian singer George Maple, sent blogs into a frenzy, reached the Top 10 of the iTunes electronic charts on both sides of the Atlantic and caught the attention of BBC Radio 1's Zane Lowe, Annie Mac, Mistajam and Monki, for whom Snakehips later recorded a guest mix. Like 'Days With You', 'On & On' was a song about heartbreak that sounded like summer - or as Ollie outs it, "It's about a bloke George was in love with who didn't love her back." 'On & On's soulful blend of retro and modern became Snakehips' trademark and was further refined on dreamy single 'Days With You', featuring Sinead Harnett.

Further remixes for Raury and Flight Facilities have also earned the duo high praise, with each release amassing well over 1 million YouTube plays. With their production work going from strength to strength, Snakehips were therefore a natural choice as nominees for this year's 'Best Newcomer' at the 2015 MOBO awards, alongside the likes of George The Poet, Sinead Harnett and Nao.

Currently working on their debut album, Snakehips have also decided it's time to reveal themselves as 25 year old Londoners Oliver Lee and James Carter. Despite a shared home city, the pair met on separate business trips to Hong Kong, where they bonded over shared musical interests. They shared a flight to Los Angeles, began talking music and booked a studio in which to work on a track. It went so well that within days of returning to London they nudged their laptops together and Snakehips was born.

Notably, all releases come through Snakehips' own label Hoffman West too, named after a fictional character Ollie created to get into clubs for free. "Put the name Hoffman West, plus five, on a guest list and no one asks questions when you get to the door," he explains. "There's something about that name that sounds so important that you're always ushered straight in."

Looking ahead and despite their hectic schedule, which saw the duo support Major Lazer on their European Tour this summer, Snakehips have still found time to produce one of the most hotly-anticipated tracks of their career to date - a collaboration Tinashe and Chance the Rapper. 'All My Friends' evokes the spirit of future-facing Hip-Hop and R&B, with both the sultry vocals of Tinashe and witty, quick-fire wordplay of Chance The Rapper lacing Snakehips' punchy, dreamscape-like beat with both power and purpose. The hook - both emotional and vividly infectious - grounds the record too, giving it a thoughtful, binding quality sure to lend itself well to international audiences.