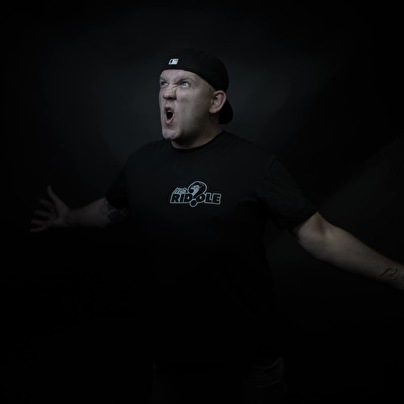 MC Riddle would then go on to host the cream of international artists as they toured down under. He has performed alongside the best in the business including Darren Styles, Scott Brown, Breeze, Gammer, Kutski, Joey Riot, Klubfiller, Alex Prospect, M-Project and many others. While many of his peers transitioned into the hardstyle and raw variants of dance music, MC Riddle persisted with his passion, constantly trying to help bring UK Hardcore back to it's glory days.

Over the past few years, hardcore down under has experienced somewhat of a resurgence. Gone were the days of clandestine, illegal warehouse raves with the ever-present threat of police raids. Pioneers pushed the scene into the light, securing regular club events and peak set timeslots during predominately hardstyle events. New parties were hatched that now command a strong and loyal following. MC Riddle is the resident host at Rocket Science and OneSeventy, both massive events geared towards UK hardcore and its variants.

More recently, Riddle has focussed his energy and passion into recording and creating music. His first production was a hardstyle-influence UK track with DJ IYF, aptly named "Beast Mode", debuted on the Gold Stage at Defqon.1 Australia in 2015.
Riddle found overwhelming success with his original track, "Rocket Science", with Havoc in 2016, creating what would go on to be an anthem for the namesake's party series. This track maintained the #1 spot on TrackItDown for over 2 weeks and has smashed dancefloors in at least three different countries. Signing on with Justice Hardcore proved to be a master-stroke with subsequent tracks being picked up and scheduled for release later this year. Collaborations with Outforce

has produced a trapcore hybrid edit of "Keep It Mello" that remains an absolute dancefloor monster.

With a massive amount of tracks in the works and pending releases, Riddle is on track to achieve his goal of a physical album built out of collaborated works by the end of 2016. He is a determined yet seasoned rising star, spurred on by recent musical success and international bookings at HTID ITMS amongst others. One to watch, this lad is going places!