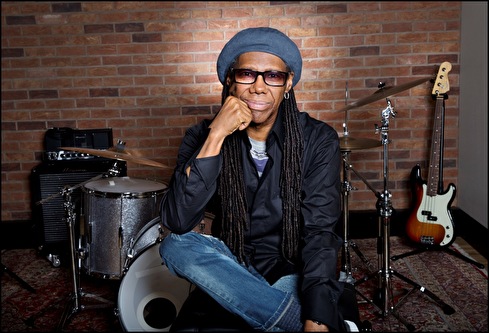 Nile Gregory Rodgers (born September 19, 1952, in New York City) is an American musician, composer, arranger, and guitarist, and is considered one of the most influential music producers in the history of popular music.

Rodgers began his career as a session guitarist in New York, playing with the Sesame Street band in his teens, and then working in the house band at Harlem's renowned Apollo Theater, backing artists like Aretha Franklin, Ben E. King, Nancy Wilson, and Parliament Funkadelic.
→ lees meer
Nile Gregory Rodgers (born September 19, 1952, in New York City) is an American musician, composer, arranger, and guitarist, and is considered one of the most influential music producers in the history of popular music.

Rodgers began his career as a session guitarist in New York, playing with the Sesame Street band in his teens, and then working in the house band at Harlem's renowned Apollo Theater, backing artists like Aretha Franklin, Ben E. King, Nancy Wilson, and Parliament Funkadelic.

1970s
He met bassist Bernard Edwards in 1970. They formed a rock band called The Boys (later known as the Big Apple Band) and played numerous gigs around New York City, but despite interest in their demos, they could not get a record contract when the music companies discovered they were black; the discrimination of the day said black artists couldn't play "rock".[citation needed]

Formation of Chic
These experiences, in addition to activist tenor of the times, led to Rodgers' active involvement in the Black Panther Party in New York City. The 1999 documentary film Public Enemy contains history and interviews with Rodgers about these times. Not the type to give up on their musical dreams, in 1977 Rodgers and Edwards joined forces with drummer Tony Thompson to form the disco/R&B band Chic, and went on to score numerous top ten hits and helped propel disco to new levels of popularity. Its songs "Everybody Dance," "Le Freak," and "Good Times" remain among the most sampled songs of the late 1970s/early 1980s R&B era.
"Good Times" signaled the start of the take-off of hip hop music, as an interpolation of the song's hook immensely contributed to the success of the Sugarhill Gang's '"Rapper's Delight," the first-ever hip hop record. Chic dissolved in 1983. As Chic's tight sound and yet rich composition became increasingly popular and sought-after, Bernard Edwards and Nile Rodgers began doing record production, sometimes together, sometimes apart. Rodgers and Bernard Edwards produced, wrote, and performed with the band Sister Sledge.

1980s
In 1980 they produced the album diana for Diana Ross, yielding the smash hits Upside Down and I'm Coming Out (which remains Ross' best selling album).
In 1981, Deborah Harry worked with both Rodgers and Edwards on the album Koo Koo.
In 1983, they produced David Bowie's album Let's Dance (to date Bowie's biggest-selling album) with several hit singles, and in 1984 produced Madonna's blockbuster album Like a Virgin Madonna's breakthrough album, spawning her two signature hits ("Material Girl" and the album's title track. Rodgers helped develop Madonna's career significantly. Duran Duran worked extensively with Rodgers after he produced the hit single, "The Reflex", in 1983 and followed up with "The Wild Boys" for inclusion on their 1984 live album Arena. Rodgers also produced Sheena Easton 1985 album "Do You".
In 1986, he produced the entirety of Duran Duran's Notorious album, which yielded a #2 title track hit. During a live set, Simon Le Bon introduced Rodgers, saying "Well, this band went through a difficult time (during Notorious). The band might not have made it if it weren't for this gentleman..." He contributed to numerous other projects and appearances with members of the band throughout the 1980s and 1990s, and in 2002-2003 helped to produce Astronaut, the new album by the original five members of the band who were signed to a recording contract.
Also in 1987 Rodgers produced the Grace Jones album Inside Story for Manhattan records.
He formed the short-lived experimental band Outloud in 1987 with acclaimed French session musician/producer/keyboardist, Philippe Saisse; they released a single album, Out Loud, on Warner Bros. Records. Saisse has often played with Rodgers during in the Chic tours.

1990s
After a 1992 birthday party where Rodgers, Edwards, Paul Shaffer and Anton Fig played old Chic hits to rapturous response, Rodgers and Edwards organized the reunion of the old band. They recorded new material and played live all over the world, to great audience and greater critical acclaim. In 1992, he worked with A&M records musician Patty Griffin to produce her first album called Living with Ghosts.[1] In 1996, Rodgers was honored as the Top Producer In the World in Billboard Magazine, and was named a JT Super Producer. That year he performed with Bernard Edwards, Sister Sledge, Steve Winwood, Simon Le Bon and Slash in a series of commemorative concerts in Japan which provided a career retrospective. Unfortunately his longtime musical partner and close friend Bernard Edwards died of pneumonia during the trip, a blow that Rodgers took very hard.
In 1998, Rodgers founded Sumthing Else Music Works music label and Sumthing Distribution, the largest African-American owned independent music label distribution company in America. Sumthing currently focuses on distributing a fast-growing new genre: video game soundtracks. Soundtrack titles include Halo, Halo 2 and the upcoming Halo 3 soundtrack. He produced a legendary album called A Great Long While by Jamband greats known as Strangefolk where he put his pop and rock know how and incorporated a great Jamband album.

2000s
The September 11, 2001 attacks prompted Rodgers to create the We Are Family Project to help begin the healing process. To begin, he organized a re-recording of the song he and his music partner Bernard Edwards wrote for Sister Sledge called "We Are Family" with more than 200 musicians, celebrities, and personalities. Director Spike Lee filmed the "We Are Family" music video and director Danny Schechter filmed a documentary depicting the recording sessions called The Making and Meaning of We Are Family. The film was chosen as a Sundance Film Festival Special Selection in 2002. Rodgers continued the healing process and produced another "We Are Family" recording and music video involving more than 100 beloved children's television characters. The children's music video airs as a public service announcement on Disney Channel, Nickelodeon, and PBS stations to promote the message of a common humanity. In July 2002, Rodgers officially created the We Are Family Foundation to celebrate the vision of a global family by creating and supporting programs that inspire and educate people about mutual respect, understanding, and appreciation of cultural diversity.
Rodgers received a NY Chapter's Governor's Lifetime Achievement Award and a Heroes Award from the National Academy of Recording Arts and Sciences. On September 19, 2005, Nile Rodgers was honored at the Dance Music Hall of Fame ceremony in New York when he was inducted for his many outstanding achievements as a producer, along with former fellow band mate Bernard Edwards. CHIC has been nominated to the Rock & Roll Hall of Fame three times - 2003, 2006 and 2007. In the summer of 2006 Rodgers served as musical director for the tribute concert to Ahmet Ertegün at the Montreux Jazz Festival in Montreux, Switzerland. The concert included performances by Chic, Robert Plant, Steve Winwood, Stevie Nicks, Kid Rock and many other artists who were signed to Ertegün's Atlantic Records. In 2007, Rodgers made contributions to the upcoming Wu-Tang Clan album, 8 Diagrams. He also wrote the title song Love Me Sexy from the movie Semi-Pro, starring Will Ferrell.