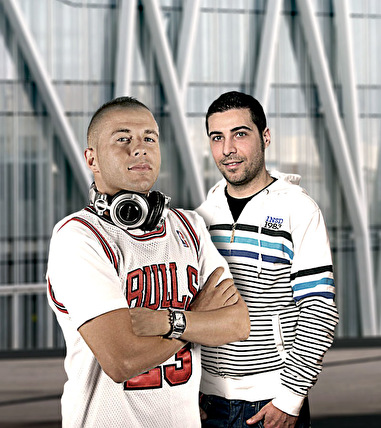 When Roberto Rodriguez (DJ Malry) and Ivan Galan (Morgan) paths crossed back in 2009, the project Hatebusters was devised. Combining talent and skill into solid DJ sets and inspiring productions, their uplifting sound was claimed by the Spanish hardcore massive.
In early 2012 Hatebusters sound crossed borders when Rotterdam Records picked up their demo. The result? Roberto and Ivan diving into a whirlwinds of strong hardcore moves! In just 6 months they released their first two EP's. 'A place to heaven', which was quickly followed up by their hit 'Get it up'. Their debut created such a buzz that Hatebusters were given the opportunity to release their first mix-CD. 'Rotterdam Records - The Best Hardcore Releases Of 2012', gave 2012 an early view of the DJ sound that is Hatebusters. Presenting a different selection of tracks, mixed with agile skill, Roberto and Ivan delivered a solid hardcore document. Also notable is the remix they made of the 2012 Nightmare official anthem, ' Nightmare Re-Enter The Time Machine ' originally produced by Mad-Dog. Completing their run on Rotterdam Records was the release of the EP 'Live your life' in September of 2012.
As things can go, Hatebusters were one of the last releases on Rotterdam Records before the bankruptcy of Mid-Town Records. Not set back by this bad break, Roberto and Ivan took their anger into the studio and started producing like never before. The demo of that session ended up on the desk of The Third Movement, and soon a deal was made. Hatebusters joined the Movement as proud representatives of the booming Spanish hardcore scene!

And here they are, proud to play their release 'Hardcelona'. An hardcore ode to the city they were born. As performers this DJ duo has a growing reputation. They've been present on all major 2012 hard festivals in Spain and are known to deliver a sound with increasing energy. Mucho hardcore kicks, each track getting louder and faster like fierce hardcore can get. Ready to continue their hardcore domination, beware of Hatebusters!