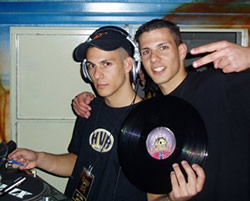 In 2003 they performed live for the first time @ The Street Garden as relevance DJ.
In those bunch of years they performed live in many clubs, since they start to be a member of the roman family "HARDFUCK PRODUCTION".
First Dj sets starting appearing on the web, letting them to be well known and perform in the best party in Rome, but that wasn't enough at all for them..

In 2005 born "Tranz Lirix" (considered their best production), and the Twins Record at the same time.
After many discographics production with their brand, they start being members of the historical "MOKUM RECORDS", creating the EP "Return of Artcore", meaning that the ARTCORE (a sub-genre of hardcore affected by drum'n'bass and acidtrance sound style) isn't dead, but evolved with them.
They start being called in the best italian discos: Florida

Since the end of 2007 untill 2011 they were resident DJ @ Cyborg, Palladium and Hollywood, and at the same time, they've decided to give life to a brand new project called "ALARMA RAVERS", making and exclusive with the "Headfuck Records", another historical brand founded by "D-Boy Records" but today's property is of Mastermind aKa Dj X-FLY.

In 2010 they started the "Underground Revolution", a radio program where between one dj set and another, they tells everything and more about this kind of music.

2011 start with the release of a new disk with Mokum Records, and for the first time in collaboration with "Walter One", historical roman DJ (from Mokum Records too) and one of the first and most important face of techno and hardcore in Italy, since the '90.
Disk name is "FUCKING ARTCORE" (remembering the old compilation of the same label called "F***ing Hardcore") where appears the 3rd remix of historical "Starjam Trantor", a techno/trance hit made in 1995 on "Primo quarto" by Walter One and Paolo Beat.
The summer of 2011 they present "Live in Rome" on Twins Records and for the first time after 10 years of Dj set, will come too the first live act.
They flown to Holland for the first time in December of 2011 to being part of one of the most importat artcore/gabber party in the world, the "PANDEMONIUM", representing the official anthem of the next years event"

In the stage in Rome of "LIVE IN ROME" brought in as a guest the "creator" of the artcore, "DJ RUFFNECK", making a live versus too with them.
In the second Dj Ruffneck's podcast were announced many artist from various nations, and they will be presented as the representatives of Artcore in Italy.

Among the latest releases, we can remember "2012", "We're back" and "FUNKY ARTCORE", where the latter is made the official video.
We've seen them as protagonist @ Q-BASE in Germany, representing the ONLY Italian flag in the Paradox area.

"Our is an ALTERNATIVE PROJECT... being able to create the past, mixed with the present days, making difference with all and above all with the political Hardcore, that have changed all the parameters of the real Gabber movement!"