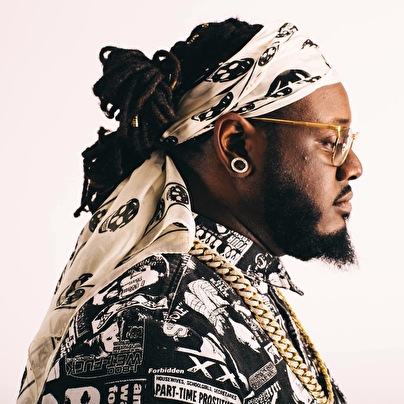 The distinctive spelling used for the album title may not hold any significance, but the meaning behind the name carries weight. "It came from people telling me that I'm running the game, that I'm the ringleader of the game," T-Pain says humbly. "That's where the whole circus imagery came from. I started putting it together with the idea that the circus is just like the music industry. You've got your different acts, all of the different animals, etc."

THR33 RINGZ is quite the musical journey, complete with highs and lows, smash singles and unexpected twists. Lead single "Can't Believe It" is already enjoying heavy radio and video exposure. Aided by sprinkly keys and T-Pain's trademark vocoder, he and guest Lil Wayne talk about spoiling their respective ladies in the song. There's good reason T-Pain's music often connects with and speaks to women. He had plenty of training dealing with the fairer sex.

"When I was in school, I would sit and talk to a lot of girls," T-Pain recalls. "I would listen to what they would talk about, what they want. I would try to understand the passions of a woman. That's where my concepts come from. That's how you know if people can relate to your songs. If you've heard the same elements of a story over and over again, you know there are millions of people going through this."

Since his schoolroom listening sessions, T-Pain has kept his ears open. In fact, listening to several sob stories inspired "Therapy," a tune where T-Pain and Kanye West talk about women who need to get themselves together. T-Pain then details relationships with negative energy on "Chopped & Screwed" a track that features Ludacris. But T-Pain's music isn't all about drama. He also listens to his friends when they gush about a special someone. The party track "Freeze," for instance, grew out of conversation T-Pain had with Chris Brown. Brown, who also appears on the high-energy song, was telling T-Pain how he finds women that can dance particularly attractive.

Of course T-Pain's long-time fans know that he especially appreciates women who dance in strip clubs. But he knows from first-hand experience how men often fall victim to DJs who switch songs up too quickly when they've just paid for a lap dance. Hence, the five-minute plus "Long Lap Dance." "In Florida, strippers charge for lap dances by the song," T-Pain explains.
"If you just so happen to ask a girl for a lap dance in the middle of a song and the DJ cuts it off, you still have to pay the full price. So I just made a long song, so whenever you ask for it, you should be good. And the DJs know that they can't cut it off, 'cause then it wouldn't be the 'Long Lap Dance' song."

With his music being largely based on real-world encounters, it makes sense that T-Pain recorded "Reality Show," a tune that details some of his wild experiences. "At certain times, everybody's like, 'I need my own reality show because the stuff I'm going through is crazy,'" T-Pain says with a laugh. "I don't know why you'd want the world to see everything you're going through, but nobody's done a reality show song yet."

Reality shows are filled with drama, and T-Pain's existence is no different. When he gets angry, T-Pain is likely to end up rapping, as is the case on "Ring Leader Man," "Karaoke" with DJ Khaled and the title track. "If I'm upset, then it's going to be a rap day," T-Pain says with a chuckle. "I make music depending on what mood I'm in. If I'm pissed off, I can't get on there and talk about love."

Even though T-Pain sometimes finds himself in an angry mood, he remains grounded because of his wife and children. His family is also the inspiration for THR33 RINGZ song "Keep Going." This acoustic tune stands as a testament to T-Pain's dedication to his family. "I want to make sure that my kids live a good life," he says. "I don't want them to have to figure out the hard way what a food stamp is. I've slept in cars. I went through a lot in my life and I'm going to make sure that if somebody's life is in my hands that they're not going to have to go through that."

Indeed, T-Pain can speak from that perspective because he knows what it is like to struggle. His Tallahassee, Florida hometown was lacking music industry opportunities and connections, so the man born Faheem Najm chose the T-Pain moniker to signify his plight. He taught himself how to make music, write songs and record music.

In 2003, T-Pain's sly remake of Akon's "Locked Up" caught the attention of music industry insiders, and the independent release of his "I'm Sprung" single led to a contract with Zomba Recordings.

T-Pain's use of the vocoder made his music stand out, and his prolific, high-quality output turned him into one of music's most oft-imitated and in-demand producers, singers and collaborators. His first two albums, 2006's Rappa Ternt Sanga and 2007's Epiphany, have been certified gold, thanks to hit singles such as "I'm N Luv (Wit A Stripper)" and "Buy U A Drank (Shawty Snappin')." He has also collaborated with Kanye West (Good Life), Chris Brown ("Kiss Kiss") Flo Rida (Low) Plies (Shawty) and Bow Wow ("Outta My System") for platinum singles.

Now, as T-Pain gains more control over his artistry, expect him to continue expanding his sonic and creative reach as a singer-songwriter-rapper-producer. After all, he knows the key to long-term success in the music industry is evolution. "You've got to be different and keep it consistent at the same time, which is super-hard to do," T-Pain says. "I come different every time and that's what people look for, what they expect."

And with THR33 RINGZ, the world expects nothing less than another magical musical adventure from T-Pain. Expectation achieved.