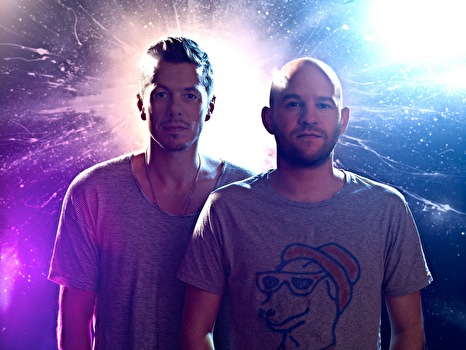 At the time, Thomilla and his collaborators from the Stuttgart crew collective, "Die Krhen", were in charge of THE hip-hop club night in Stuttgart - at the RED DOG (helmed by the brothers Ali and Basti Schwarz, a.k.a. Tiefschwarz), then the ultimate on Stuttgarts club scene, despite the fact that only 400 people could find room in the tiny cellar. Following their regular encounters at the record store, it was decided that Michi Beck should join the Wednesday team at the Red Dog, the small club becoming the birthplace of the DJ and producer team, Thomilla and Michi Beck, these days better known as TURNTABLEROCKER.

During that time, 1996/97, the first album emerged from their joint studio efforts: Michi Becks solo debut, "Weltweit", produced by Thomilla, featuring Michi Beck as host and MC alongside a number of illustrious guests, such as Wyclef Jean, Scorpio and Melle Mel, Afrob, Smudo. The album also introduced the track "Turntablerocker/Beweg deinen Popo" feat. Max, giving birth to their joint name at last. "Weltweit" was followed by a live tour and countless DJ gigs which proved that their DJ team vibe was worth manifesting on their next record production - no longer the classic set-up consisting of producer and frontman, but a joint composing and producing of tunes without vocal performances, getting by, above all else, without renowned features.

During their frst TURNTABLEROCKER album production, "CLASSIC", Thomilla and Michi Beck discovered that their new project required a change of musical habits, approaching their compositions in a different way than they would rap or RnB instrumentals - creating step by step the new TURNTABLEROCKER style that they would come to refer to as BOOGIE.

Not only the Turntablerockers enjoyed the result, which went from ..0 to ..17 in the German album charts - an established hip-hop act with an album that seemed experimental by the musical standards of that time. TURNTABLEROCKER not only caused a stir in Germany: based on their live and DJ shows, and last but not least their success in the German-speaking territories, CLASSIC was released almost globally. Japan, Canada, Mexico, Europe, Australia - for the first time it was no problem to purchase a Four Music product worldwide in specialist stores.

That development has continued to this day, in the studio productions by the two Berlin residents, as well as in their countless DJ gigs. Asking TURNTABLEROCKER to define their style of music is always challenging, because it's in a constant movement. The last two or three years they've been playing mainly impulsive percussive spacy house music trying to lift the crowd to another level.

After 15 years together behind the decks, TURNTABLEROCKER meanwhile left their record label homebase Four Music. They've decided to stay independent and free to place their productions where they fit.

2004 they released two tracks on the former London based label "Fine", followed by a couple of remixes and other projects. In the last two years they've been working together with Michi Reinboth's Munich based record label "Compost Black Label", where their last two 12" were released, called "All Night" and "Whenever Whereever".

TURNTABLEROCKER are currently back at the studio, and were all eagerly anticipating the arrival of their next single. So far, these two have always been good for a surprise