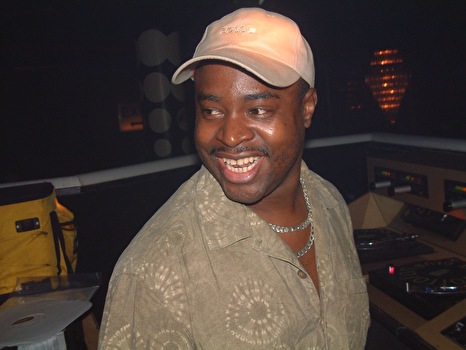 And the facts don't lie: Disciple has amassed a huge and devoted fan base; established the successful music label Catch 22 Recordings in 1997; has produced and A&Red several worldwide smash hits, and received a coveted Grammy nomination in 2002.

DJ Disciple was born David Banks in Brooklyn, New York, with music in his blood. His father played piano with Miles Davis and his brother handled bass for George Benson. From a young age, Disciple was enamored with disco, R&B, gospel, Latin, funk, and hip-hop. The Big Apple's unrelenting musical beat inspired him to learn mixing.

DJ Disciple's on-air work at college stations WBMB and WHCS earned him a large audience of music-loving fans that followed him from party to party. His first professional DJ gig took place at the legendary Studio 54. Disciple soon found himself hosting The Best Kept Secret, a mix show on WYNE, where he exclusively debuted a litany of now-classic underground tracks in the '90s.

Disciple has climbed to the top of the house music ladder with DJ residencies all over the world, from Red-Lite in Montreal to Motor in Detroit. His groundbreaking sets at Pacha in Ibiza, Release (San Francisco), and Ministry Of Sound

would have him play these venues at least three times a year. DJ Magazine twice named Disciple one of the world's top 100 DJs. He has a faithful following that live for his inspired journeys as well as respect from Pete Tong, BBC Radio 1 and MTV Europe.

When he's not in the DJ booth, Disciple remains focused on his burgeoning label, Catch 22 Recordings, which he launched in 1997. Catch 22 has not only produced hit records, but has also made stars of its artists. "Put Your Hands Up" by the Black & White Brothers was the label's first worldwide hit in 1998. Success continued with the number one Billboard hits "Caught Up," "It's Easy," and "Yes" from DJ Disciple's 2000 album, My True Colors. 'Caught Up" featuring Mia Cox was also used on Showtime's Queer As Folk and was nominated for a Grammy in 2002.

DJ Disciple's 2006 Ibiza smash hit, 'Work It Out" featuring Dawn Tallman, was licensed under Universal House-Trained Records in the UK. It was listed for play on Radio 1 while simultaneously appearing on MTV.

In 2009, Disciple continued to perform live at many global venues including Dragon I in Hong Kong, Sneakerz Festival in Amsterdam, Viva in Colombia, and Saxar in Moscow. A quick YouTube search will reveal hours of footage filmed by joyous clubheads who documented these memorable moments.

This year, Catch 22 scored another big hit from Dutch newcomer DJ/producer Stefan Vilijn in the form of the massive big-room anthem 'Jazmin Garden." Likewise, DJ Disciple teamed up with fellow New Yorker Dru Hepkins on 'Romper Room." Barcelona-based producer Javi Mula, who tore up dance floors with his 2009 hit 'Come On," tapped Disciple for his vocal skills on his latest seismic smash, 'Sexy Lady." Also in the works is another release with Dawn Tallman, 'Whole World Party," which appears on the 2010 edition of Roger Sanchez's Release Yourself compilation. In the coming months Catch 22 will feature the talents of American Idol Tyra Juliette as well as underground sensation Emily Angel while Disciple will be on tour in Europe this summer, performing at several high-profile festivals.

From his time helming residencies at GBH during the Centro-Fly era and Le Souk and Pink Elephant, as well as promoting his own events (namely The Next Level Party and Release), Disciple continues to be not only a popular performer overseas but also a mainstay favorite in the New York club scene as well.

While he has witnessed so much history and so many musical trends, which will be featured in upcoming book, Around The World In 150 Clubs, Disciple's thirst for good music remains unquenchable. While his accomplishments are numerous, he refuses to rest on his laurels and continues to look to the future.

'I see dance music going through a very big change shortly," he says, 'and I aim to change with it. People who love and understand music know that it's fluid, forever flowing, forever changing. It's wonderful to go with that flow but it's so important to always be original, and to always be yourself."