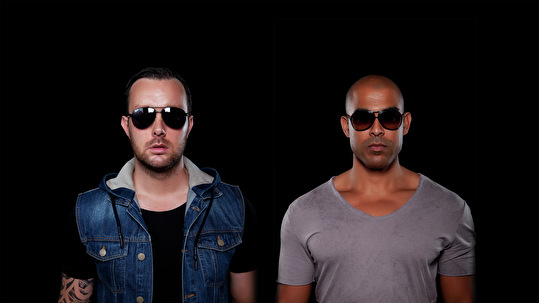 The energy Brian Chundro & Santos bring to the booth and their crowd rocking performances, held in an impressive list of prolific clubs, venues and festivals throughout the whole of Europe are becoming legendary. With a solid record and management deal at Dutch company Selekted Music in the bag and a brand new booking agency, the possibility of pursuing a fruitful music career looks bright for this talented Dutch duo.

Brian Chundro got infected with the house virus at a young age. He witnessed the rise of the Dutch house scene starting in the early 90's, got influenced by by the Dutch upper league of DJ's to eventually decide to start DJ-ing himself. Brian and Santos first met in 2007, discovered they both have a deep rooted passion for quality house, swapped some ideas and formed the DJ team nowadays known as Brian Chundro & Santos.

Santos (Ramon Moolhuijsen) bought his first DJ set at the age of 14. His first love music wise consisted of R&B, hip hop and 2step. At a young age he already had the opportunity to play in clubs like Escape and the iconic club RoXy. In the years that followed, his music style changed as Santos developed an affection for house music. In 2007 he teamed up with Brian Chundro to eventually become DJ duo Brian Chundro & Santos.

The track that jumpstarted their music career became their remix for Me Faz Amar by Tiko's Groove feat. Mendonca Do Rio, initially produced as a personal bootleg for their DJ sets. Me Faz Amar originated from Brasil where local legend Tiko's Groove produced this monster tune but all available mixes aside, it were Brian Chundro & Santos who turned the original version into a straight up latino dance floor killer.

This much sought after remix became Tune Of The Week on Dutch portal Dance-Tunes.com in the all genres section, shot to the # 1 position in their Top 100 within a week and vastly turned into one of the most viewed tracks on Dance-Tunes.com ever. Their remix made its way to an impressive list of compilations such as Radio 538 Hitzone, Brutal, Latin House Sessions 2010, Latino Grooves 2010 and The Beat Of Summer (powered by SlamFM). To date, their remix for Me Faz Amar is still considered one of the biggest dance tracks of the 2010 summer season.

With a great deal of determination, Brian Chundro & Santos manage to maintain a high level of churning out massive tunes on a steady basis with EP's lined up for release at home base Selekted Music and the internationally acclaimed Defected Records. As Brian Chundro & Santos are much in demand remixers, they showcase their remix skills on tracks by none the less than TJ Cases, DJ Gregory, Gabriel & Castellon, Stefan Vilijn and Carlos Silva. Currently, Brian Chundro and Santos are the residents jocks in various clubs such as Powerzone, Escape, Manhattan and on events and festivals like Latin Village, Salsa Lounge and all Sexy House editions.

Early 2010 saw the grand opening of their very own party concept House of Passion – a ceremony hosted by Dutch DJ icon Erick E -, a full entertainment concept in which live artists and instrumentalists play a prominent part alongside the performing DJ's. Following this successful concept, Brian Chundro & Santos developed a second concept named Golden, set up in collaboration with the highly acclaimed Amsterdam based Escape Venue. The Golden concept showcases luxury, style, class and musical creativity, served by a selection of national and international artists alongside the Golden founders Brian Chundro & Santos.

In 2011, the Golden concept experienced no less than zeven editions in the Escape Venue Amsterdam where Brian Chundro & Santos were accompanied by a number of prolific artists such as DJ Gregory (Faya Combo / Defected), Roog (Hardsoul), D-Rashid (Latin Village), Genairo Nvilla (Dirty Dutch), Michael Mendoza (Dirty Dutch) and many more. Due to packed editions throughout 2011 and due to popular demand, the decision was made to turn Golden into a monthly event in 2012 where Brian Chundro & Santos again will invite a selection of fine DJ's to bring Golden to the next level, with plans already in the making to take Golden abroad for international editions. In 2012 Golden will be a BC-S party @ the Escape Amsterdam, every first friday of the Month with the biggest names in the dancescene!

On the music side of things, the year 2012 will see Brian Chundro & Santos releasing multiple EP's, remixes, digital and physical compilations and international studio collaborations with a.o. Brazilian hit producer Tiko's Groove and vocalist Max C, who is known for his outstanding vocal work for the likes of Axwell, R3hab & Swanky Tunes, Firebeatz, Inpetto, Sidney Samson and more.

Brian Chundro & Santos prove that hard work, dedication and ambition pays off. With the release of new high quality club tunes in the near future, this dynamic duo will prove to be a force to be reckoned with in the global dance industry. Be on the lookout for their gigs in the clubs and their future releases!