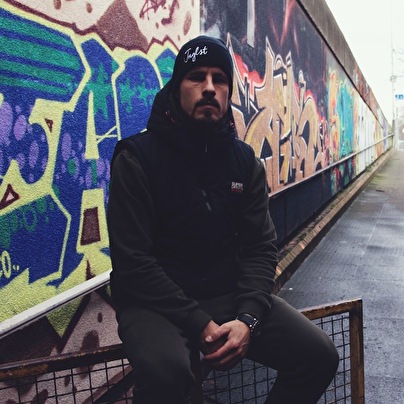 Fast forward a few years, at the age of 12 he started discovering new sounds via CD and Vinyl, with new influences from 80's/90's Hip Hop, early 90's Hardcore, Progressive House, Trance and Jungle, which spurred off a new drive to listen and learn everything about these un-pc, late night, bass driven and underground sounds. So with more vinyl archive under his belt, the next step was inevitably investing in a pair of decks, with minimal savings he bought a pair of Numark TT-1200 belt drive turntables and his Dj journey began. He has never looked back since.

Having evolved his skills through a big variety of DJ mixing equipment for several years now and having a big collective of influential friends within music, Intencity really started to carve a style and produce interesting and exciting Dj skills, especially when mixing Jungle and Drum and Bass. His affliction with the genre took over and he was now on a pathway to being 100% hooked on the history, lifestyle, culture, sound and big vibes that Jungle and Drum and Bass bring to the music world.

Since the early days of bedroom mixing, Intencity has gone onto further educate himself within different levels of music; honing DJ skills at several Technics Dj academy's, early music production with friends which then led to him passing a Diploma college education.

He has gained a lot of experience with Dj'ing at many varied types of events, this is all by the time he was 21, so the true foundations had been set for the next chapter into his music career.

His movements within underground music, especially Drum and Bass have seen him hold some big monthly residencies in his home town of Leicester, Midlands and Europe, he has supported some of the biggest acts across the whole spectrum of the underground music scene, including performing at a variety of Raves, Gigs, Radio shows, Festivals, charity events and even setting up several successful events himself.

Intencity has been a resident of several nights in Leicester and has performed on many events in the UK and Europe for over 10 years: Snowboxx Festival, Formation Records, Hysteria, Genetic, Hijacked, Viper, DNA, Bass Militantz, Subzero & Friends, Strawberry Fields Festival, Basskicks, Beastwang and Basssea Festival to name a few.

He collaborates with several other artists under different aliases, through DJ'ing and Music Production, such as:
- SwiftCity (Intencity b2b Swift) a duo from Leicester that DJ across
UK and Europe.
- Intence Cycle (Intencity b2b Cyclic): a duo that produce and DJ
Together in the UK.
- TenBob (Intencity b2b Shilly): a duo that Dj in the UK and promote their own events.

Intencity's style of mixing is diverse and he can mix on any format such as vinyl, Serato, USB and CDJ's, but his true skill and talent is honed through vinyl. His style is based with 3 Technic Turntables and a Pioneer mixer, going deep through the roots of DnB. Not one to be pigeon holed, Intencity has a vast knowledge of the genre and goes through many angles of Drum and Bass but with a main influence of Tech, Neuro and Dancefloor induced sounds. Creating huge uplifting and down right dirty double drops, quicktime mixes tied in with three track blends, he creates mesmerising sounds with FX and surprise tactics that only he can achieve during his sets. Add in some chopping and switching of completely random tracks through different genres, makes his sets very unique to his own style that always push out high energy, creativity and spontaneous mixes that get the crowd pumping and dance floor jumping.

The early days of music production with friends, alongside the music and the idols he aspired to, have laid the foundations for his current music production to come into fruition. Education, personal work and collaboration projects, are now starting to take him to where he wants to be in the next phase of his musical journey, especially within the Drum and Bass scene. With future releases on Formation Records