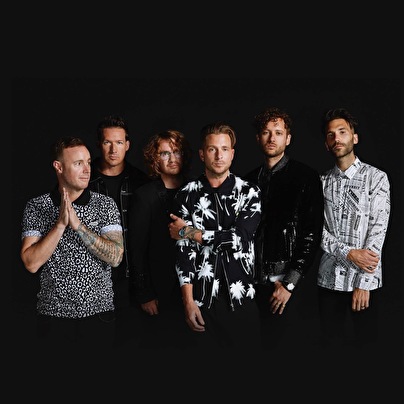 "There's this crazy juxtaposition happening on the album," says Tedder, whose bandmates include Zach Filkins (guitar), Drew Brown (guitar), Brent Kutzle (bass, cello), and Eddie Fisher (drums). "On one hand we tiptoed into the EDM world and brought in that energy, drive, and tempo, but on the other it's got a lot of acoustic guitar and a much more organic feel than what we've done before." For help in achieving that supercharged but soulful sound, OneRepublic collaborated with leading-edge producers like Philippe Zdar (the French composer known for his work with artists like Phoenix, The Beastie Boys, Cat Power, and Depeche Mode), Jeff Bhasker (Kanye west, Jay Z, the Rolling Stones, Fun.) and Benny Blanco (Maroon 5, Rihanna, Gym Class Heroes). Native also features some guest artists, such as Adele backup singer Bobbie Gordon, as well as Grecian harpist HarpEri, (recruited while OneRepublic was recording at the famed Black Rock Studios in Santorini).

Though the album's built on deftly crafted beats and intricately textured arrangements, a spirit of simplicity stands at the heart of Native. "Our goal is always to put out the most honest record possible. So even though we're very much inspired by EDM, I also love what's happening with folk music today. It's cool to see that the world doesn't always need 300 beats per minute, that just an acoustic guitar and a voice can connect with people," says Tedder, who also points out that "the swampy, stompy feel of Southern Delta blues" played a major role in helping OneRepublic to instill Native with a certain raw energy. OneRepublic also looked to the folk and blues movements in teasing out the emotional content of Native. "These new songs are about mortality, love, hope, desperation, faith, failure—the whole gamut of human emotion," Tedder says. "We try to give the lyrics a certain gravity without being preachy, and make the kind of music that music that connects with people not just at a party or a club on Saturday night."

Still, there's no shortage of uplift on Native. On "Feel Again," the band beautifully blends gospel-style melodies, handclap-backed harmonies, driving beats, and huge-hearted lyrics about redemption and renewal. Both instantly catchy and intensely moving, "Feel Again" also features the heartbeats of Guatemalan children which were recorded by the band as part of their work with Save The Children (an international children's-rights organization to which OneRepublic is donating proceeds from the single's sales). Equally anthemic, "Counting Stars" begins with tenderly strummed acoustic guitar before bursting into a soaring, shimmering epic featuring guest vocals by Bobbie Gordon. ("We were at RAK Recording Studios in London and she just walked in and knocked out those vocals and changed the whole song," recalls Tedder. "Definitely one of my favorite moments in making the record.")

Even when dealing with darker themes, Native maintains a majestic atmosphere. "If I Lose Myself," for instance, relentlessly builds and bursts, its shining melodies and dance-floor-ready rhythms disguising the song's somewhat morbid subject matter. "It sounds like some epic dance record, but really it's about me going down in a plane crash," laughs Tedder (a self-confessed aerophobe who admits that "even though I fly constantly, there's at least a few minutes on every flight where I'm convinced it's all over"). That joyful intensity also saturates tracks like "Something I Need" (a "Hey Jude"-inspired anthem that the band dreamed up in order to create "one of those songs that comes on the jukebox and by the time you get to the chorus, the whole bar's singing along"), "Love Run" (a smoldering, piano-driven stomper), and "Life In Color" (a gorgeous slow-burner marked by galloping drumbeats, warm synth tones, and vocals that reveal Tedder's masterful range).

Throughout Native, OneRepublic augments the emotional power of each song with a newly revamped vocal approach. Born and raised in Tulsa, Oklahoma, Tedder grew up singing in church and counts country music and gospel as key influences on his singing style. But despite delivering dynamic and unrestrained vocals in OneRepublic's live shows over the years, he long shied away from bringing that same brio to the recording process. "I'd always slightly neutered my voice on the albums, maybe out of fear of stepping too far out and getting all showboaty," he says. "With this album I felt like I was past due to channel that live sound into the recordings and let a more gospel-esque sort of singing and chanting weave its way through the songs."

The seamless elegance of that sonic weaving owes largely to OneRepublic's artistry as arrangers, as well as to its careful studying of the EDM world. "I got obsessed with EDM after seeing Swedish House Mafia at Coachella last year and being blown away by their set," says Tedder, who's previously collaborated with the EDM trio (as well as with DJ-culture pioneer Paul Oakenfold). "It started off as an experiment but took on a life of its own, and eventually we stumbled into this strange hybrid that allowed us to preserve our own sound but still bring in something totally new," he notes.

Another key factor in shaping OneRepublic's newly refined sound, writing and recording in faraway places was crucial to opening up their sonic possibilities. "Because we're traveling all the time, we've always made our albums all over the place, and what naturally happens is we end up taking on some of the vibe of wherever we happen to be at that time," says Tedder. "In Paris we were right around the corner from Moulin Rouge—you step outside, and you're just in the epicenter of this amazingly cool world. And in Greece we were lucky enough to play with local musicians who brought in a completely fresh sound you can't find anywhere else."

Freshness is infinitely essential to OneRepublic, who foremost aspired to make Native a "very modern record, a snapshot of life in 2013," according to Tedder. "It's so important to us that every album be an evolution, where we make these huge lateral movements with our sound and then from there write a bunch of great songs," he continues. "It's definitely a mother of a process, but it's really the only way for us."