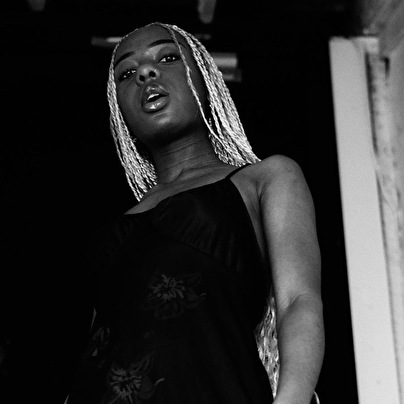 Born in Nigeria, raised in Montreal, and now based in Vancouver, DEBBY FRIDAY's work spans the spectrum of the audio-visual, resisting categorizations of genre and artistic discipline. She is at once sound theorist and musician, performer and poet, video artist, film director, writer and PUNK GOD. In March 2018, she released her first self-produced EP, titled BITCHPUNK, to reverberating underground acclaim. Her sophomore effort, also self-engineered and produced, was released in August 2019 on independent label, DEATHBOMB ARC. Titled DEATH DRIVE, and accompanied by her first music video and directorial debut for the lead single FATAL, Friday has described the new EP as "hot noise: full of grief and full of relief. It is the painful and pleasurable next step, the sacrificial offering of my old life to the new." She has been featured in several publications, including: Pitchfork, Bandcamp Daily, the FADER, Discorder Magazine and more.

Writing for Mask Magazine, John Rufo describes the artist as, "intricately dexterous and dangerous… [one who] echoes, samples, sings, speaks and reverberates through innumerable Black diasporic sonic geographic landscapes and fields…" Her multi-disciplinary art practice explores themes of ritual, transformation, and emotional intensity, as well as touching upon discourses of power and eroticism.