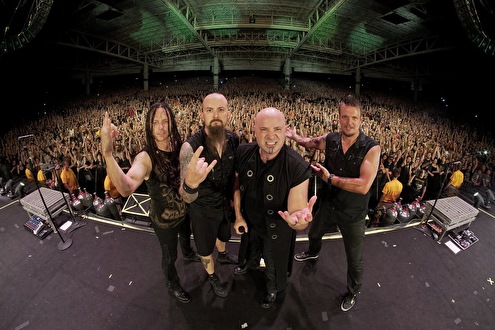 "We had basically been going nonstop since 1998," says Wengren. "We got to do our things. It didn't take too long until the itch started coming back."

"We wanted to return when we collectively had that fire underneath us," agrees Donegan. "We missed it so much that we could tap into this energy and deliver the right album. We did it on our own terms."

That album, Immortalized [Reprise], initially became the best-kept secret of the group's career. In 2013, Draiman released a top 15 record with Device's self-titled debut, while Donegan and Wengren launched Fight or Flight with A Life By Design? Following the success of both, Draiman and Donegan decided to have dinner back in their hometown of Chicago during January 2014. Without notifying their families, friends, or label, that's the moment they stirred the sleeping beast. However, instead of simply emailing ideas, they actually flew back and forth to each other's respective home studios for every writing session. This is the first time they collectively wrote together since 2001.

"When the band formed, we all lived in the same city," recalls Mike. "So, when we wrote, we would all be in the same room together. We had gotten away from that because we don't live in the same states. There's definitely something to be said about that chemistry and interaction when we're together feeding off each other. We pushed ourselves to rekindle that."

"We wanted to go back to where it started before the technology existed where you could create from across the country," David remarks. "We were in the same space again, throwing ideas back and forth on the fly and allowing them to grow immediately. For this album, everything was written in the same room. It was wonderful experiencing how it used to be back in the day for us. That became apparent in the material, whether it was the passion of the performance, the power being harnessed, or the feelings evoked. We could feel the difference."

In order to capture that "difference" on tape, they headed to Hideout Recordings in Las Vegas to work with producer Kevin Churko [Ozzy Osbourne, Five Finger Death Punch]. It marked their first collaboration together, and Churko pushed the musicians to expand their signature style.

"We agreed it was time to start trusting an outside ear and see if somebody could get something out of us that we hadn't done ourselves," Donegan continues. "The goal was to find a producer we felt creatively comfortable with, but who could challenge us and spark a new evolution. Churko did that. We had chemistry together right out of the gate. We were prepared to change things."

In June 2015, the group revealed themselves creatively with a big bang, their first new single "The Vengeful One." Disturbed was officially back. "The Vengeful One" served as the perfect clarion call for this next chapter. Beginning with a bombastic drum beat and jarring riff, it bares its teeth with an unabashedly metal refrain that's instantly unshakable.

"Basically, 'The Vengeful One' is the personification of The Destroyer, the Angel of Death, Gabriel, or the Hand of God looking over humanity," explains Draiman. "In the song, it's the End of Days. Things are getting worse, and we're becoming more destructive. The media is playing everyone against one another and baiting the entire world. It's judgment day. This is that entity's voice speaking and passing judgment."

"I wanted to lay down a big spacious beat to give the guys room to play," Wengren goes on. "It's something slightly different for us, but it's got that signature syncopation we love."

"Musically, it's got that old school metal sound," smiles Donegan. "It's definitely Disturbed!"

The instrumental opener "The Eye of the Storm" bleeds into the infectious and incendiary title track bolstered by deft rhythms and scorching leads. In the middle of this roller coaster, "The Light" tempers a haunting keyboard and robust guitars with a towering vocal.

"The message for 'The Light' is one of positivity," admits Draiman. "Most people are quite apprehensive about the "dark" periods, and experiences of their lives. However, sometimes those dark periods of time are a necessary path we must take in order to finally see, "the light" so to speak."

Following a tradition of outside-the-box covers, Disturbed tackled Simon & Garfunkel's classic "The Sound of Silence" for Immortalized. Rather than amplifying it, they went the other direction, tapping into Draiman's classical training and Donegan's knack for arrangement. With an orchestral expanse, acoustic leads, and chilling delivery, it's unlike anything in the group's catalog.

"We didn't want to cover up David's vocal with loud, aggressive, and distorted guitars," says Donegan. "We wanted to showcase his vulnerability and take a leftfield approach. The strings and violins really deepen it. It's something that might shock people because we went down a new path altogether. We did what felt right and saw the vision through."

Disturbed have made good on every promise since their genesis. Their quadruple-platinum 2000 debut, The Sickness, formally announced their arrival as hard rock leaders. Throughout their career, they received a Grammy Award nomination in the category of "Best Hard Rock Performance" for "Inside the Fire" in 2009 and churned out nine No. 1 singles at Active Rock Radio, while eventually selling over 12 million records globally. However, Immortalized will live up to its title and fortify their legacy further.

"I think the fans will feel like it was worth the wait," concludes Donegan. "We've been planning this for the past year and keeping it a secret so we can't wait to hear the response. I hope fans realize we have a lot more left in us. This album reassured me of that. To be away from it for almost 5 years, get back in a room, write together, and tap into that fire is awesome. Part of me didn't want to leave the studio! We still have a lot more to say. We still have a lot more to do. We're returning stronger than ever. I think Immortalized shows that."

"I can't wait for everybody to hear it," states Wengren. "We've had so many fans asking that I hope the response is, 'This is exactly what we've been waiting for!'

Draiman leaves off, "I just want people to walk away feeling powerful. That's it. That's what we wrote this record to do." –