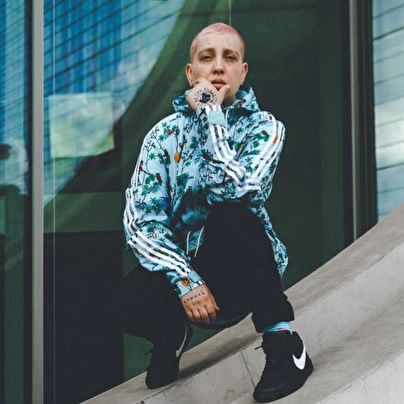 Alinka's musical journey began at an early age in Kiev, Ukraine, where she was born and spent her early childhood. Raised by a pianist mother, she began reluctantly learning to play the piano while trying to convince her parents to let her play guitar instead. Her exposure to Western music was very limited at that time due to living in a communist country where censorship was common practice. When her family immigrated to Chicago from the USSR as refugees in the late 80's, she was introduced to pop music and immediately fell in love with artists like Michael Jackson and Madonna. An obsession with music followed suit, and a love for a broad spectrum of genres blossomed from there.
Her first exposure to House Music came from local radio shows where you could frequently hear tracks by Chicago legends like Cajmere and DJ Funk, and shows like Sonic Boom helped expose underground music to the masses.

In the late 90's a chance night out a her University's local club Orchid, where prominent Chicago DJ's were regulars, quickly cemented a burning passion and desire to explore this exciting movement. Soon after Alinka immersed herself in the dance music scene spending her summer working double shifts at a local pool and working for rave promoters to build up enough cash to buy some decks and began collecting records. After a year of skipping class and relentlessly practicing and growing her mixing skills, she moved back to the windy city and began her full time musical pursuit. Working for various club promoters, doing odd jobs passing out flyers and helping with party logistics just to get into clubs underage to see her favourite DJ's, all while spending hours digging for tracks at Chicago's legendary record shop Gramaphone which inevitably led to a meeting of minds with many revered figures and DJ's in House music like Superjane, Derrick Carter, Diz, Gene Farris, Honey Dijon, Gemini, and most importantly Justin Long who in 2001 recruited her to be the opening resident for his .Dotbleep party at Smartbar where she honed her skills until 2008.

In 2012, an impromptu meeting with former Hercules and Love Affair vocalist, Shaun J. Wright, changed her life forever. The pair instantly bonded over their shared love for Chicago House Music and Cajual Records, and it wasn't long before their evolving friendship resulted in what would be the first of many musical collaborations. The pair launched their Twirl parties and label, continually strived to inspire each other both musically and spiritually and the result has been a burgeoning DJ career and an impressive back catalogue of material for both of them collaboratively and individually on the likes of The Classic Music Company, Jackathon Jams, Crosstown Rebels, Leftroom, and of course Twirl, where as well as their own material the duo have welcomed renowned artists like Spencer Parker, Virginia, Physical Therapy, Kim Ann Foxman and Matt Tolfrey onto the label.

Now residing in Berlin, a place where Alinka has well and truly found her feet, feels like she belongs and forever feeds her inspiration. The rising talent has become an in demand DJ both on her home turf and across the globe. It's clear to see that Alinka is here to stay and with the foundation of knowledge she's acquired over the years it's no surprise to hear her educated, emotive and entrancing DJ sets are being talked about by so many around the world.