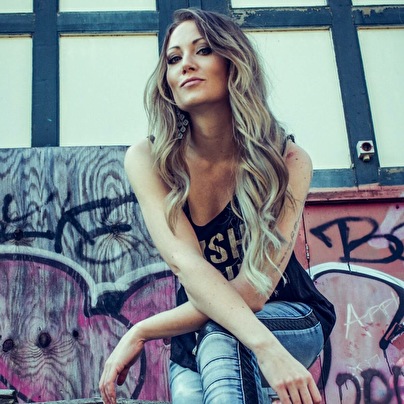 Depth, grace and beauty with a razor edge; a brief description of one of the most talented women in the Hardcore scene. There are only a few women that can stand tall knowing that they are one of only a small handful of women who produce their own music – and one of these remarkable women is Malin Kolbrink, a.k.a Miss Hysteria of Enzyme Records.

As a young girl, Malin constantly found herself overwhelmed with a desire to be creative in all things – particularly music. She always had a healthy curiosity for how her favourite artists were creating those cool sounds and decided that she would attempt to create her own songs with a keyboard and a double cassette deck. Not long after that experimental phase, and after asking producer friends of hers some tips and tricks to get well on her way, she would find herself moving from Fasttracker, to her first pair of turntables and on to her current DAW Cubase in a matter of no time! Nothing was going to stop her musical momentum from that moment on!

A misunderstood, teenage women who developed a grudge against any social institution when in high school, would soon find herself consumed by the legendary Hardcore culture of Thunderdome and beyond and was so graciously accepted by the at-the-time misunderstood 'Gabbers' of that scene. Though they were projected negatively, Malin always found unity, friendship and felt comfort with these mis-interpreted youth's.

After perfecting her mixing abilities throughout the years and playing small gigs at school events, Malin was spotted by a young promoter and Dj – Patrick de Rooj, who was curious about her abilities and booked her for her first on-stage appearance and from the moment that she began her set, she felt what we all desire to feel – that sense of purpose; the knowing, that this life was the one that she was born to lead. After performing together for a couple of gigs, Patrick & Malin discovered that they had an undeniable on-stage chemistry and would go on to perform together for over ten years!

In 2012, Patrick and Malin, a.k.a Lunatic & Miss Hysteria, were given the opportunity to collaborate with one of Hardcore's most respected names for high quality sound – Nosferatu, with their track 'Technology Exceeds'. After its success, the infamous Ruffneck – owner of Enzyme Records, invited the both of them to become a part of the Enzyme Records family, and with pride and honour, they accepted and have gone on to become two extremely successful and desired artists in the Hardcore Music industry.

Their run together throughout the year's proved to be nothing short of a remarkable experience – a slew of unforgettable moments, releasing beautifully inspired music together and performing side by side on so many world-renowned parties, they had the time of their lives. In 2014 however, after their desires advanced to new levels, and their united visions found themselves to be slightly altered, they decided to focus on their solo careers. After parting ways, and still performing together from time to time, Miss Hysteria has been blowing minds with every opportunity she has been given!

Injecting her music with her admirable intelligence and passion for space and science, Miss Hysteria has managed to create a style all her own that is beautiful and inspired. Next to her surreal melodies, this women creates some of the most cut-throat beats out there; sounds that leave so many in awe of her abilities. From atmospheric melodies that send you to an ethereal universe, to jaw-dropping snares, kicks and hi-hats, her productions and performances will leave you breathless. Don't let her pretty face fool you – Miss Hysteria is a name that demands respect, and this remarkable women is here to stay.

Now she has a new alias: Adamant Scream. Check her out. Lunatic and Miss Hysteria - Just for you