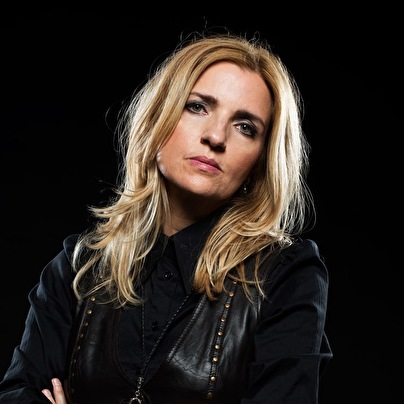 ROOTS AND START OF DJAX RECORDS
Miss Djax started her DJ career at the age of sixteen. Her musical roots can be traced back to disco, funk and new wave. Being open minded and always on the hunt for the newest dance music she played a unique blend. Everything in her life was about music and at the age of eighteen she formed the band 'B-System', a new wave band in which she played the bass guitar.
Having worked in record shops for many years, Saskia met a large number of promising artists whose music never got released because, according to the Dutch record-companies, it was "not commercial" enough. That triggered her to start her own label and in 1989 Djax Records was founded. The first release was an album by the Eindhoven based hardcore hiphop band 24K (No Enemies, 1989). Only a few months later the first 12" of Eindhoven producer Stefan Robbers was released on a new division of Djax: Djax-Up-Beats was born......

DJ OF THE YEAR
Miss Djax had her international breakthrough when she played at the notorious MayDay rave in Berlin 1992. With her hard and uncompromising acidtechno set she made a great impression at the promoters on-site. As a consequence she played the mainstage at all big international raves and festivals from that day on. One year later Germany's leading dance magazine Frontpage declared her 'DJ of the year'. In the following years her name was always in the international top 10 rankings.

CHICAGO AND DETROIT
In that same year (1992) Saskia went on a trip to Chicago and Detroit to meet her favourite producers in person and to see with her own eyes were it all had started. In Chicago she visited the famous Warehouse club with Armando, went to Trax Records, DanceMania, DJ International etc. while in Detroit she hang out with Carl Craig and Alan Oldham and visited all relevant clubs and labels there too. It was a great experience and after two weeks she went back home with a bag full of acid and techno tracks from producers like K-Alexi, Felix Da Housecat and Paul Johnson. Djax-Up-Beats became the first European platform for the producers from Chicago: a bunch of new talent like Mike Dearborn and DJ Skull as well as the old skool heroes like Steve Poindexter, DJ Rush and Spank.
Saskia started a cooperation with the legendary Warehouse label from Armando. Some of the most sought after Chicago house classics such as Work That Mutha-Fucker and Circus Bell's were remixed by top-producers like Hardfloor and became a massive underground hit. Till today these records can be found in the record boxes (or USB stick) of many of the world's top techno deejays.

LOVE PARADE
Four years in a row, from 1995 to 1998 she took part in one of the major techno happenings: The Love Parade in Berlin. In 1998 Djax even had the privilege to start at pole position! Many people will remember the 20-metres long red/silver Djax-Up-Beats rocket with 20.000 watt of acidtechno terror on board! Miss Djax also played two times, in 1996 and 1998, at the Love Parade end manifestation at the Victory Tower in front of millions of people.

NEDERHOP AND BREAKBEATS
Besides the worldwide respected releases on Djax-Up-Beats, Djax Records is also known for being the first company to release Dutch spoken rap-music, later called Nederhop. In 1991 Saskia discovered The Osdorp Posse that soon became the most popular rap-band of the Netherlands! In 1995 they won the Dutch Popprijs for being the most innovative Dutch band! Also ABN and Spookrijders were two of Djax's successful nederhop bands.
Being open minded toward various styles of music Saskia founded two new divisions in 1997: Djax-X-Beatz and Djax-Break-Beatz. Both divisions gained success with Grumpyhead and Head First who both performed at the famous SWSX music convention in Texas in 1998. Dance (bigbeat, drums 'n bass, triphop) combined with pop and rock. With these two new divisions Djax lifted up its position at the Dutch music market and both in 1997 and 1998 Djax Records received the Dutch Award for being Best Record Label.

ARTWORK
Not only the music but also the looks of Djax Records have always been important to Saskia. Since 1991 she is working with Alan Oldham, the famous illustrator from Detroit. Till today Alan made hundreds of beautiful illustrations and five Miss Djax comics for Djax-Up-Beats. Saskia also worked with Zender and the famous American illustrator Ed Repka, who is well known for his Megadeth album covers.

DJAX ANNIVERSARIES / AWARDS
In January 1999 Saskia received the Dutch Award 'De Veer' for her effort and work for the Dutch music industry. Later that year Saskia published her 10th Anniversary book 'Djax Records The Power of The Underground'.
In 2004 Miss Djax celebrated the 15th anniversary of Djax Records by releasing her first mix album with 24 of her favourite Djax-Up-Beats tracks and 2005 saw the release of Miss Djax first artist album 'RAW' that included floorfillers such as 'Sick of U' with vocal support by DJ Rush. The album contained a new Miss Djax comic, again by the hand of Alan Oldham. Miss Djax promoted her RAW album with a European live tour.
The 20th Anniversary of Djax Records (2009) was celebrated with the release of the DVD 'Underground Nation'. Compiled by Saskia, it contains 90 minutes of exclusive footage and is a true testimony to club culture. In conjunction Miss Djax proudly recieved a Gold Record for 1.3 million records sold in 20 years of Djax Records and a Gold Record for 40.000 albums sold of Afslag Osdorp.
In 2014 Miss Djax celebrated the 25th anniversary of Djax Records with a European Djax it Up Tour. She released an old school acid vinyl (From Within) as a tribute to her loyal fanbase and made a remix for Chris Liberator and Sterling Moss. She released 'Overdrive' and 'Forbidden Dance' both accompanied by an amazing video. With these two releases she announced her new sound to the world and both got great reviews in Clublife and Fuzz Magazine.

THE X-FACTOR
Miss Djax's second artist album 'Inferno' got released in 2008. Both singles of the album, 'Hell's Bells' and 'Headbangin', became Record of The Month in Raveline Magazine. 'Still Dominating', together with Human Resource and 'Stereo Destroyer' in co-operation with Marshall Masters became international hardtechno anthems and rocked the dancefloors all over the world. Furthermore she mixed and released the hardtechno album 'Kick Down Volume 1'. In the same busy year Saskia was asked to take place in the jury of the famous TV show the X Factor but she decided that a tv career was not her ambition (yet).

DJAX IT UP
In the nineties Saskia toured with her Djax it Up events around the world. In 2009 she decided to bring this event back to life and hosted Djax it Up stages at Ground Zero, Q-Base and Free Your Mind.

PET TRIO AND TECHNO CRUSADERS
Early 2011 Miss Djax formed a cooperation with the Brazilian Pet Duo under the name Pet Trio. Their single 'Dance or Die' set fire to many dancefloors. In 2012 Miss Djax recorded the album 'Techno Crusaders' together with the Canadian Patrick DSP and in 2013 they released the album again with remixes by Mark Archer, Chris Liberator, Pacou and many others.

2016 - FLIGHT 303
In 2016 Miss Djax long awaited third album will be released together with a brandnew Miss Djax comic. Available on double vinyl in a limited edition of 303 handnumbered copies. 'Flight 303' is a mix of pumping old school techno with fat 303 lines and modern dance influences. A unique blend between the past and the future by a true originator.