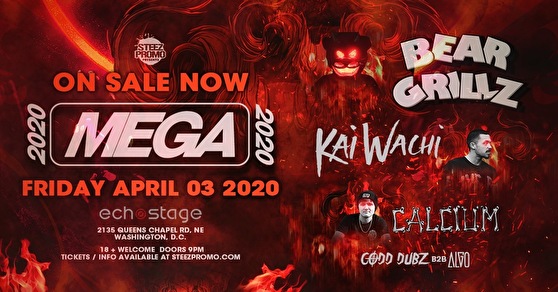 Postponed DATE TBA: MEGA DC ft Bear Grillz, Kai Wachi, Calcium
This event is postponed. Stay tuned for future updates regarding the TBA postponed reschedule date. Thanks to all our Steez Fam for your continued support.

Steez Promo presents MEGA DC ft. Bear Grillz + more!
→ lees meer
This event is postponed. Stay tuned for future updates regarding the TBA postponed reschedule date. Thanks to all our Steez Fam for your continued support.

Kai Wachi
http://soundcloud.com/kaiwachi
https://twitter.com/KaiWachimusic
https://www.instagram.com/kaiwachiofficial/
Kai Wachi has been a dominant force in bass music since his debut. His thrilling productions continue to break new ground as the Boise creative has become accustomed to bridging different styles for dynamic hybrid works. Although the 25 year old has been highly acclaimed for extraordinary sound design and a unique hip-hop signature in his bass-boosted records, his strong musical sensibilities is where he truly stands out above the rest.

Over the years Kai has established himself as one of the industry’s most promising producers with support from the likes of Excision, Bassnectar and many more. Records including his debut album, DEMIGOD, which includes collaborations with Famous Dex, Sullivan King, Grabbitz and more, have been particularly integral to his more recent growth, as they’ve mesmerized fellow artists, fans and curators at both Apple and Spotify.

Kai has been hailed as an MVP of such festivals as Lost Lands, EDC, Paradiso and Wobbleland, as well as become a mainstay on Kannibalen Records while touring alongside Black Tiger Sex Machine numerous times. With one of the best independent labels and booking agencies at his back, there is no limit to Kai Wachi’s success in the future where he will continue to advance dance music at large.


Calcium
https://www.calciumdubs.com/
https://soundcloud.com/calcium-dubs
https://www.instagram.com/calciumdubs/
https://twitter.com/calciumdubs
Calcium (Adam Cooley) is a Texas born producer who has quickly taken the electronic music scene by storm. Calcium is constantly pushing the boundaries of music by using his unique sounds of dubstep and riddim. He has received immediate support from the legends of dubstep including Excision, Slushii,
KAYZO, Liquid Stranger, Subtronics, as well as others.In 2019 Calcium released his second EP on Never Say Die records. Calcium’s big collaborations include a single with Peakaboo as well as Dion Timmer. Calcium’s most recent tour run has been a big one supporting the bass music legend Excision. With support dates confirmed on Kayzo’s upcoming tour as well as a big festival run this summer, Calcium is ready to keep proving to his fans why he is one to keep an eye on.

Algo
https://soundcloud.com/algodubstep
https://www.instagram.com/algodubs/
https://twitter.com/Algodubs
"Algo" Originating from Baltimore, Now based in Los Angeles is a versatile bass music heavy hitter. Having established himself in 2011, he has been churning out dance floor destroyers ever since. Whether it be dubstep, house, dnb, or hip hop....Having released on some of the most respected label imprints in dance music his sets carry you through a full spectrum of sounds and genres. Algo is not an act you want to miss.

Codd Dubz
http://www.soundcloud.com/coddmusic
twitter.com/codd_dubz
Hailing from Long Island, New York is Matt Coddington aka Codd Dubz. After coming across dubstep from a New York Hip-Hop background, It wasn’t too long before he picked up on it to start creating his own set of sounds and a signature in his production. Codd Dubz has made a name for himself chopping up faders on the mixer with his energetic performances behind the CDJs all around the U.S , Australia, Europe & Canada. Besides his energetic performances also comes his music. Codd Dubz has released music on labels such as Never Say Die: Black Label, Disciple Round Table & Circus Records just to name a few. His music gaining the support of acts such as 12th Planet, Liquid Stranger, FuntCase, HeroBust, Borgore & More