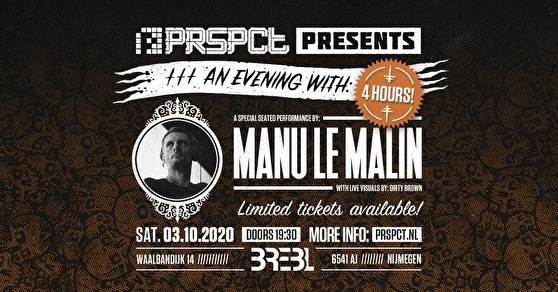 With a career that began in Paris at the dawn of the rave era, Manu Le Malin is one of France's most crucial exports for hardcore and techno music. Renowned for his dark, intense selections and skilled turntable techniques, he is a unique performer who has captivated club dance floors and festivals around the world. On the first weekend of October, the legend returns to the Netherlands for two intimate seated four-hour-long shows as part of PRSPCT's ongoing 'An Evening With' event series, starting at Worm in Rotterdam on Friday October 2, followed by a night at Brebl in Nijmegen on Saturday October 3.

Manu Le Malin's music tastes are expansive, resulting in numerous side projects that include his techno alias, The Driver, a collaboration with Electric Rescue as W.LV.S, and a theatrical performance with Regina Demina developed during an artist residency at Palais de Tokyo in Paris. He is also the curator of Astroplis festival's infamous hardcore stage, Mekanik. For 'An Evening With Manu Le Malin', prepare for a baptism of visceral electronic music, with visuals from Dirty Brown Visuals, one of Holland's premier digital artists and VJs.

PRSPCT is a record label releasing hard electronic music since 2003. PRSPCT has been hosting seated 'An Evening With' events at Worm since June 2020, featuring extended and special sets from its roster of artists, set in the cozy surrounds of a mock-1930s jazz cafe.

Pre Sale Starts This Thursday 19.00 CET and is limited!!