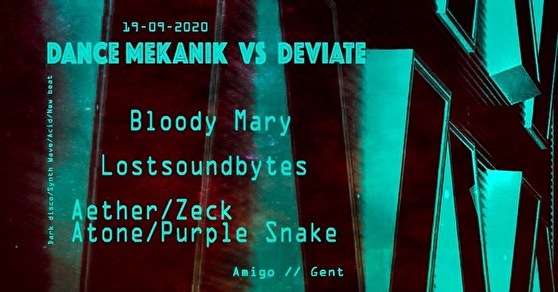 After relocating to Berlin in 2005, it wasn’t long before Bloody Mary’s career as a DJ was put on the international stage. Nowadays, her name is easily recognizable in the worldwide electronic music scene, having performed at festivals and clubs the world over as both a DJ and live act for more than 10 years.

In 2010, Bloody Mary started her own vinyl and digital imprint: Dame-Music. To this day, the label has had over 40 releases (featuring artists like KiNK, Thomas P. Heckmann, Hardfloor and many more), and has hosted numerous label parties across Europe.

As a producer, Bloody Mary has released countless records on Dame-Music over the past 10 years. Since 2017, she decided to branch out further, releasing her music on Josh Wink’s Ovum Rec., DJ Pierre’s Afro Acid, and Tim Taylor’s legendary UK techno imprint, Missile.
She regularly features as part of Amsterdam’s ADE, such as being hand picked by Roland to talk about the 303, or being asked to produce and match music to an advertisement in front of a team of industry professionals as part of the Sync panel.

Brussels Based producer LostSoundBytes develops an haptic music in his performance swinging between more or less fast industrial sequences and agressives basslines in gloomy dark alleys for shamans in perdition. At the head of the label Vastechoses with some nocturnal lascars, he released his records on tapes and those of his partners for a handful of dollars less and a few slaps in the mouth more than the others.