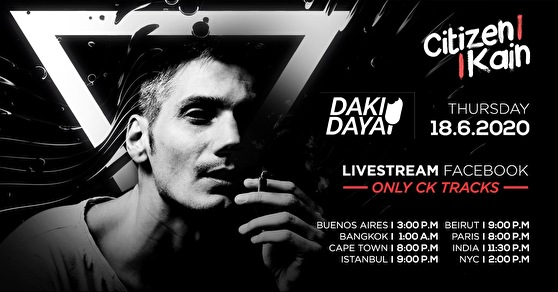 Tracklist will be shared on June 19 on CK's instagram page
→ lees meer
A 2 hour Only Citizen Kain Tracks Stream!

Tracklist will be shared on June 19 on CK's instagram page:
https://www.instagram.com/citizenkain/

None of us knows what Bruno retains from Orson Wells or Kane, and we could surely relate his music to the timeless apologues of the American director and to God's cursed son. However, Citizen Kain has now become a proper name in the techno scene and one of its main actors, almost relegating these mythical references to mere anecdotes.

It did not take millenaries, nor one century but only half a decade for the French DJ to divert us from it and demonstrate the evenly universality of his compositions. Escaped from his juvenile punk times, survivor of the nineties’ rave ambient, from 2005 and on, CK eagerly produces sharp techno, invariably wavy and contemporary, adapting with his personality what goes through and agitate it. It is barely impossible to define Citizen Kain's style without getting lost with tortuous adjectives. Prolific author, compulsive, he takes on every techno genre smoothly with an experienced technique: he combines a rhythm efficiency and an undisputed go with a varied melodious sensibility. Kain refines all the themes used in his music, conserving the very essential few notes and sounds that reveal its power. He pushes his effort toward the public, craving for its immediate pleasures. He builds each of his sets with the same and constant preoccupation: get the audience involved with his music, unanimously clasped by its twisted energy and surrounded by the mere and heavy emotion result.