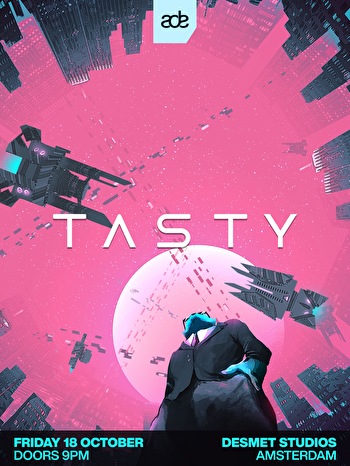 Tasty is an independent record label and promotional network that has been providing the world with delectable electronic music since 2011.

Originally launched as a YouTube channel focused
on spotlighting up-and-coming electro artists, Tasty quickly found success catering to a niche that had been virtually untouched at that time.

Tasty continued to pick up steam as it launched its record label subset in 2012, releasing music by artists like F.O.O.L, Lets Be Friends (now known as JOYRYDE), Haezer, Favright and Urban Contact.

Tasty also played a role in the massive Spotlight Compilation Vol. 1, which included songs by such artists as Dabin, K Theory, Pegboard Nerds and Vicetone.
More recently, Tasty has been recognized for singles like TheFatRat’s “Xenogenesis” and “Windfall,” as well as “Grape Soda” and “Ma Chouchoute” by Snail’s House.

The Tasty-released Highway EP by F.O.O.L that were also highly successful, bringing a long-awaited return to Tasty from the artist.
Rhodz released Fading Horizon LP that later followed up with Fading Horizon Remixed including Far Too Loud, Nhato, Falcon Funk, PrototypeRaptor, Foxhunt, Becko, Viticz and VOIID.

Since its genesis, Tasty has sold over 240,000 singles and over 8,000 albums/EPs. Much of these sales can be accredited to groundbreaking projects like The Noisy Freaks’ Straight Life Album, 'Destroyer of Speakers' and 'Feelings' EP by F.O.O.L, Tasty's compilations and TheFatRat's single success.

Tasty also boasts over 500 million views for their music releases on YouTube and 200 million streams on Spotify.

Today, Tasty is very much accomplishing the same goal it set out with at the start, while still remaining among the finest, most respected promotional networks out there. Just now closing in on 1 million subscribers, Tasty is excited to finally be making its ADE debut this year with a showcase at Desmet Studio’s Amsterdam.

Just like Tasty itself, the event is bound to be unforgettable!