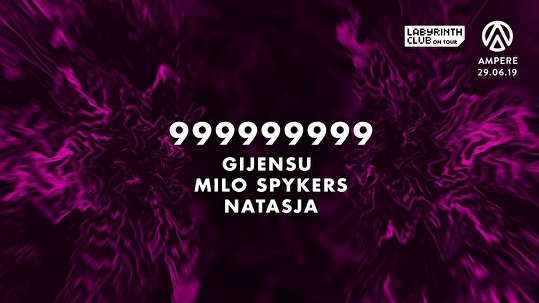 999999999 - Officially started in July 2016 and already affected the most important clubs and festivals all around Europe. They aroused much interest even outside the continent becoming one of the most requested live acts of the techno scene. First three releases on their label "Nine Times Nine" and their appearance on Planet Rhythm special "303" vinyl release were immediately sold out after few hours. Live is what they are whether in or out of the studio, they are spontaneous. Improvisation with hardware is the key element of their performance and is impossible to replicate.

GIJENSU is the Stockholm duo consisting of Anton Abrahamsson and Oscar Strand. Their mutual love for the harder, faster and rougher side of techno brought them together in their hometown where the lack of musical brutality is palpable to say the least. Influenced by the aggressive and colorful sounds of the previous decades, combined with a vision of creating something new, Gijensu strives to explore, develop and invent.

Anyone who witnessed MILO SPYKERS at the decks, knows this experience is as powerful as it is loving. From the moment he started performing in the gritty Antwerp underground in 2016, he demanded any raver’s attention. Milo loved music for as long as he can remember, electronic or not. Growing up being surrounded by his parent’s vinyl collection impacted him profoundly: large portions of his sets use the grainy soul of techno’s original medium. Because history matters - but so does the future.

Located in Antwerp, NATASJA is hosting our very own concept Girls Like Techno at Club Vaag. Over the past editions she invited artists like Anetha, Micol Danieli, Onyvaa and Mirella Kroes amongst others. You can expect some dark and pounding techno when she’s behind the decks, while her electronic magic box will mercilessly haunt your night for hours.