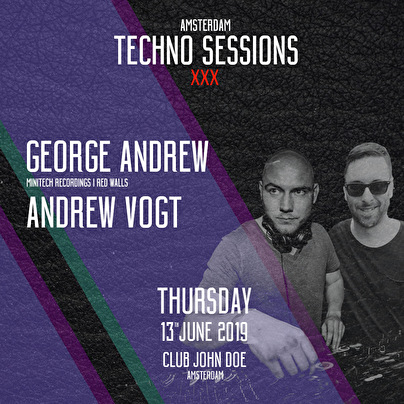 George Andrew
The Dutch Techno DJ George Andrew, a.k.a Joris Turenhout has been actively perusing his passion for electronic music for the past years. This passion started at a young age. At the age of 16, Joris attended a party where Gabber music was played. He was hooked instantly. After a few years of enjoying his favourite music, he found his true love: Techno. He has been partying every weekend on Techno music ever since.

Moody melodies, experimental breakdowns, and a sense of classical composition mark Andrew Vogt’s dance music sets. With nearly 18 years experience behind the decks and a start in the New Jersey rave scene in the mid-late 90s, Andrew departed from traditional dance music after experiencing Sasha and Digweed at NYC instituiton Twilo. The progressive sound, with its overtures and fugues, captured Andrew and marked his style leading to a ten-year residency with Verboten as well as a residencies at a number of other sound institutions in New York City such as Sullivan Room, Shelter, and Love. His ability to craft sets that maintain the eloquence of the progressive sound yet enrich the dance floor with groove has led to opening for enormous acts including ,M.A.N.D.Y, Martin Buttrich, Matthias Tanzmann, Lee Burridge, Davide Squillace, Damian Lazarus, Stacy Pullen,Magda, Dubfire and eventually his initial musical muses, Sasha and John Digweed.

A true veteran of the dance music community in New York City, Andrew has always approached any dance floor, whether playing at the legendary TV lounge during the Detroit Movement Festival, or a sweaty local after-hours, with the integrity of a first love and a quality worthy of a long career.