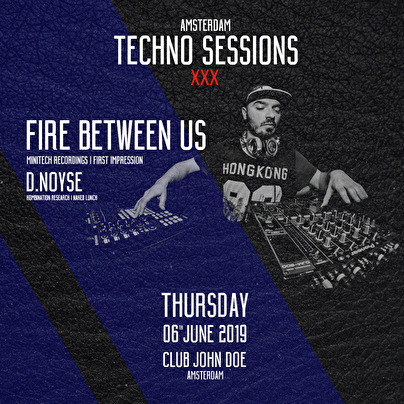 , Mutesounds, Beyond festival, Play! Festival) besides his usual late-night sets at various underground clubs in Utrecht and Amsterdam.
As part of the Minitech Recordings team you can find Fire between us frequenting their label nights and releasing on the label. Recently he also started working as their radio coordinator. Fire between us also works with Techno and House-legend Robin “ Jaydee ” Albers, releasing on his label “ First Impression ”.
Fire between us is Techno. Wonderful, up-tempo solid techno full of emotion. Techno that never gets dull or boring, but rather plays with your mood and leaves you exhausted and energized at the same time.
Follow Fire:
www.soundcloud.com/firebetweenus
www.mixcloud.com/firebetweenus
www.instagram.com/firebetweenus
www.firebetweenus.com

D.Noyse
Born in Lisbon Portugal in 1981, Diogo Jesus aka D.Noyse developed his interests in Electronic music at an early age.
As a teenager, he worked together with one of the countries leading audiovisual outfits OM Matias.
Here followed the opportunity to work closely with top promoters affiliated with X-club Kaos, Locomia, Kadoc and Pacha Ofir to name a few.
In 2003 his arrival in The Netherlands saw the beginning of an infinite push in producing his unique sound.
By 2005 Diogo was performing at exclusive events and well-established venues through-out The Netherlands delivering Detroit infused sounds influenced by artists that have been on the forefront of Techno since the genre exploded.
Diogo signed his debut release in 2012 with " Disher-wash" on the much acclaimed and well respected Techno label "Naked Lunch Records" owned by A.Paul with whom he recently re-mixed material from Dani Dimitri and Virgil Enzinger.
Diogo is currently landing gigs further into Europe while working hard in the studio for his upcoming releases in 2019.