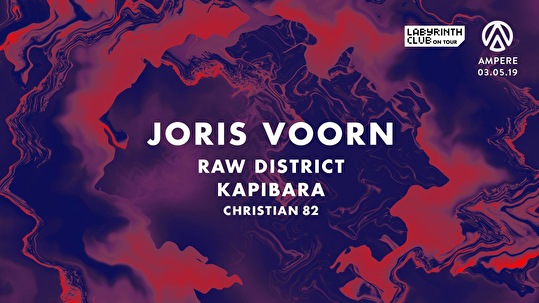 JORIS VOORN sits at the epicenter of the Dutch electronic music scene, the most renowned and instantly recognizable artist from Holland, representing underground house and techno on a wider global stage. For a country with a population of just seventeen million Holland’s contribution to world electronic music is unsurpassed. While house and techno trace their roots to the marginal and mainly black American underground, its taken a relatively small country in the European lowlands to flip electronic music on its head and turn it into the global powerhouse it is today. www.soundcloud.com/joris-voorn

RAW DISTRICT is a house project from Belgian duo Vernon Bara and Massimo DaCosta, exploring the deeper, darker side of dance music. Fewer samples and more organic sounds, influenced by soul, funk and disco. With releases on some of the most established labels such as Innervisions, Crosstown Rebels, Moon Harbour, Souvenir Music and Defected - they have undoubtedly secured themselves a reputation of being in-demand and talented producers. www.soundcloud.com/rawdistrict

KAPIBARA. Hailing from the Amazone riverbanks in South-America but stationed in the South of the Netherlands, this semi aquatic trio is known to infuse their cultural heritage when creating electronic dance music in the studio together. Kapibara’s signature sound floats somewhere in between deep house and techno. Converging feeling and emotion into a pallet of natural grooves. These chameleons bring great adaptability to their sets and as a resident of the infamous Labyrinth club and hoster of Taka Tuka, they have the perfect homebase to do so. www.soundcloud.com/kapibaramusic