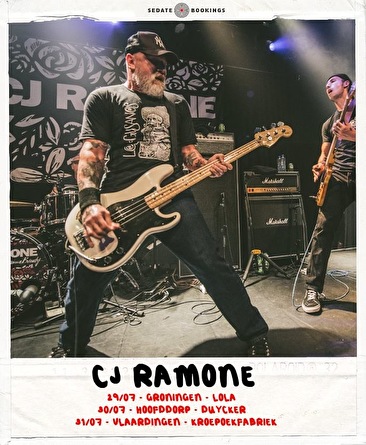 Cj Ramone,
Out of the seven billion or so people on the planet, only seven men have been lucky enough to be gifted with the Ramone surname. As of 2017, four have already headed off to that great gig in the sky. Thankfully, CJ Ramone has no plans to leave any time soon. He expertly stepped in for Dee Dee in 1989 and played with the legendary punk quartet until their 1996 breakup. He sang lead on “Strength To Endure”; he wrote two tracks for the band’s farewell album, ¡Adios Amigos!; he was onstage for their epic final show, delivering those iconic “1-2-3-4!” shouts and rubbing shoulders onstage with Eddie Vedder, Tim Armstrong and Lemmy. CJ Ramone is as important a part of punk rock history as anyone else you can think of, and the best part is he’s just getting started.

“When you’re in the Ramones family, you’re a Ramone for life,” CJ says. “Richie Ramone still has it; Marky Ramone still has it; hell, Johnny Ramone’s wife changed her last name to Ramone. I absolutely feel obliged to keep the legacy going. I 100 percent do. I feel it. I don’t sit down and try to write Ramones songs, but I was a huge fan since I was a kid. I played in the band for seven years. I’m undeniably influenced hugely by them. I’ve heard people say what I do sounds like the Ramones. Of course it does! How could it not?”

DeeCRACKS were happy to see our Austrian Friends on stage again theyre trau disciples of the religion of '1,2,3,4!' after a killer Japan tour were mighty glad theyre back to put some hard hitting punkrock up in lola!

LATTE+ The year was 1997 and LATTE+ broke onto the scene with their first demo, “Dustbin in Town”, six songs that would set the stage for the next twenty years of straight up, in your face punk rock. Over the years, the line up would change and the band would be forced to take time off but the music always remained. After “Dustbin in Town”, the band continued to write in English and would eventually release their self-produced album, “The New Generation Sucks” in 1999. LATTE+ would begin to get the interest of independent labels and all copies of “The New Generation Sucks” quickly sold out. This exposure allowed the band to tour and play 50 shows within the next year. 2001 found the band in the studio recording their first label supported release, “Guerriglia Urbana”. Being their first release in Italian, this album would sell over 3000 copies and bring the band to the world stage performing in front of 4000 fans. Their position as an influential, leading group in the Italian independent music scene was now cemented. The 2005 release of “Molotov” further proved that LATTE+ was a punk rock force to be reckoned with. Their schedule soon filled up with split records, tribute albums, and radio and television promotions. A few years later, the guys would find themselves in a transition period culminating in 2009’s "Non E’ Finita", released through Florentine label Controtempo Produzioni. While touring to promote “Non E’ Finita”, the band continued to write and eventually produce “Asociale”, their 5th album (and arguably best to date), which was released in 2012. 17 years after they first emerged from the small Italian city of Empoli, LATTE+ would reach worldwide recognition in 2014 with “No More Than Three Chords”, a masterpiece of Ramones influenced songs perfected with that 1-2-3-4 punch of tight, fast paced punk rock ethos. Released through Italy’s Rocketman Records and eventually in the US on Outloud! Records, “No More Than Three Chords” would be played by fans in Italy, France, Germany, Japan, the US, Argentina and the world throughout. In 2016, in celebration of 20 years of dedication, the band released “Punk Rock 20”, a compilation of 20 of the best and even worst songs of their career.
On February 23rd 2017, LATTE+ released their 7th long awaited album, “Stitches”. The album was preceded by two singles: "Screw You" and "Darkness Inside Your Heart" (official videoclips on YouTube). Produced by Professional Punkers in collaboration with Monster Zero for Europe and Outloud! Records for the US, its 13 tracks of pure punk rock Ramones style, "Stitches" solidifies the band's scope and proves to be a strong followup to 2014's "No More Than Three Chords".
After a couple of european tours it was time to write and record new stuff.
Recorded in early 2019, "Next To Ruin" will be out next summer!