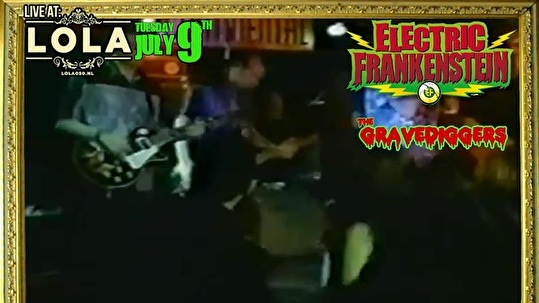 - over 25 years, over 100 record releases, and more! EF has almost single-handedly returned rock to its most basic and savage roots, the way it was meant to be. They have been receiving international acclaim for their exciting brand of Punk Rock and Roll, done with the great intensity of such bands as the Stooges, MC5, Dead Boys, NY Dolls, Damned, Black Flag, Misfits, AC/DC, Kiss, Cheap Trick, Aerosmith, etc. In addition to playing the most dynamic, ravenous, and menacing rock you've ever heard, EF recognizes the importance of integrity. From giving proper nods to the architects of street-level rock (Iggy and the Stooges, Dead Boys, AC/DC), to fiercely supporting DIY labels to their constant efforts to put fans first ahead of profit, EF is championing the cause to bring Rock back to the people and out of the hands of corporations. EF aren't young or pretty, and in case you haven't noticed neither is Real Rock & Roll. EF aren't here to be your girlfriend, they're here to ROCK! While stupid critics might say 'but, it's only rock n roll, its nothing new', EF fans are saying "Damn, right!" as they embrace the best of what's loud, fast, and rules from the last 30 years distilled down to one single organism. EF are one a mission to revitalize Rock & Roll and save people from the boredom of "alternative music". EF shows are intense, exciting, and inspiring.

EF have been well reviewed in such magazines as Kerrang, Metal Hammer, Terrorizer, Rock Sound, Alternative Press, Hit Parader, Seconds, Thrasher, Lollipop, Tail Spins, Rue Morgue, Maximum Rock N Roll, Flipside, Big Takeover, Paper, Aquarian Weekly, and countless European & Japanese magazines as well. NY Press picked EF as the "Best Punk Band in NYC". EF have received top 40 commercial radio airplay in the USA, Top 5-10 on many American college radio stations, and were Number One on Belgian, Finnish, and Swedish, etc., national radio. EF has even been picked by the Frankenstein Society as the bands representing the release of the Frankenstein commemorative stamp for the US Post Office. Not only are they one of the top most featured bands in the music press (currently #2 out of the Top 500!), but they have a loyal fan following in over 15 countries, with many bands citing EF as an influence and covering EF songs, and drawing thousands at music festivals internationally. EF's raw, powerful, and melodic Dead Boys meets AC/DC sound that has made them the Kings of High Energy Punk Rock N Roll!

EF has been on over 40 of the world's best indie record labels (Sub Pop, Man's Ruin, Estrus, Get Hip, Victory, Au-go-go, TKO, Junk, etc.), selling hundreds of thousands of records. They have appeared on many European music televison shows and have had their songs or artwork featured in many videogames, movies and tv shows, including X-Files, Dawson's Creek, Signs, American Psycho 2, Flophouse, Tony Hawks Underground, and the occasional porno flicks as well. EF have since their inception been touring the US, UK, and Europe; often as headliner, even doing a sold out show at the Fillmore in SF and played to thousands at European festivals. EF played the 1997 Warp tour. They plan to tour Japan and Australia soon. EF have played with Danzig, Monster Magnet, Marilyn Manson, Hole, Social Distortion, The Misfits, Dead Kennedys, Dictators, Poison Idea, SOD, Joe Strummer, The Dwarves, Nebula, Orange Goblin, Electric Wizard, Turbonegro, Hellacopters, and many more. One of Joey Ramone's favorites, EF can count many other bands as fans of their music as well (Jon Spencer, Metallica, Monster Magnet, etc.), and they have returned the favor via the popular "A Fistful of Rock & Roll" compilation series, produced by EF guitarist, Sal Canzonieri.

The EF invasion has begun with Dark Horse publishing a 160 page book on EF. In 2004, EF will have a world wide art gallery and book signing tour for the upcoming book, "Electric Frankenstein!", as well as two fantastic EF clothing lines being done by Sourpuss Clothing and Lucky 13 clothing, and EF skateboards, toys, and videogames in the works too!