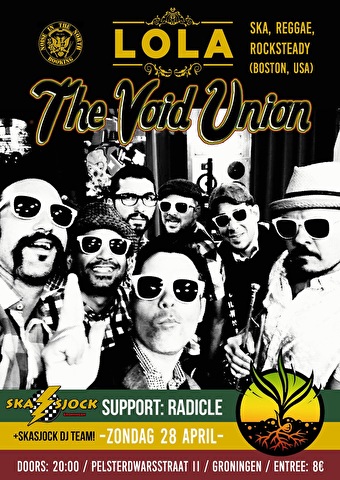 the band of brothers from Boston is BACK!
with the classic old-school ska, reaggae and rock stedy sound you know and love!
→ lees meer
Live at Lola: The Void Union

the band of brothers from Boston is BACK!
with the classic old-school ska, reaggae and rock stedy sound you know and love!

Conventional wisdom has guided bands in the computer age towards isolationism; find one’s turf, stake a claim, and interpret peer success as a call to arms. Void Union has propelled itself out of cyberspace’s din with a counterintuitive mission statement: Preserve the Jamaican music of the 1960’s, collaborate with Ska’s originators, and actively recruit guest players from the ensembles that have proven equal to the task of reinventing the genre. Some of those musicians include Derrick Morgan, The Skatalites, Lynval Golding (The Specials), King Django, Angelo Moore (Fishbone), Chris Rhodes (The Mighty Mighty Bosstones, Spring Heeled Jack),and David Hillyard (The Slackers, Hepcat), all of whom feature on the Void Union’s recordings. In November of 2010, Vin Gordon (The Skatalites, Bob Marley and the Wailers) joined the group for a watershed European tour.

Thaddeus Merritt (Bass), Rick Smith (Drums), Rich Graiko (Trumpet), Alex Stern (Guitar, Keys), and Anant Pradhan(Tenor Sax), comprise Void Union’s core, but, the band's philosophy lends itself to a collective atmosphere in which like-minded musicians sit in and assure that no show is the same as the one that preceded it. The audience at a gig is not a mere handful of die-hard Ska enthusiasts; a survey of the crowd yields suits, working stiffs, parents, children, dreadlocks, moptops, and...hipsters? All turn out to bear witness to a versatile ensemble that is as at ease providing the jazz-tinged instrumental foil to a Jamaican legend as it is leading a sing-along at a neighborhood bar.

Void Union’s sophomore full-length, “Higher Guns,” is the result of combining the group’s collective ethos with a savvy navigation of the current recording industry. The original concept of fielding an augmented lineup to record a live instrumental full-length was derailed by the individual members’ touring commitments with Westbound Train, The Toasters, Dave Hillyard and the Rocksteady 7 and other modern contenders. In response, the band adapted by working both on their own and with a bevy of guest vocalists in world-class studios, green rooms, bedrooms, and at least one jumbo jet. It is an engaging document that carefully balances a commitment to Jamaican authenticity with a reluctance to revert to genre cliché. King Django and Westbound Train’s Obi Fernandez guide “Aiming” from a pulsating early-reggae rhythm into anthemic drunken catharsis. Angelo Moore infuses a relaxed bluebeat homage with his own demonic sense of tragi-comedy on “Fly-A-Me-Away”. Void Union’s own formidable writing staff shows their range with the somber nocturne “Revenge Ska,” and the politico noir of “Tea Party Girl.” The core members close out the record with a spaghetti-western guitar instrumental, and a lone echo-drenched voice screaming the motto that has brought them to the brink of international curiosity: “HIRE GUNS!”

Radicle - Reggae Band
The Dutch reggae band Radicle originated in November 2016. The shared passion for live and reggae music has led to a collaboration that has its own unique sound. After some different band names and changes / additions of musicians, Radicle has grown into a nine-member reggae collective.

The band consists of a drummer, bassist, guitarist, two saxophonists, trumpet player, two keyboard players and since March 2017 lead singer and percussionist ‘Dave Ploeg’ has joined the band. Ever since Dave’s arrival, the band has started to take on a fixed form and that results in beautiful new songs. In the meantime Radicle has been able to perform these songs several times in and around the city of Groningen and they performed twice at a festival in Germany. In September 2018 they participated in a talent show and were chosen second best in the final. In December 2018 Radicle released their very first Ep called: ‘Demo Songs’.

The music of ‘Radicle’ expresses itself with powerful vocals, influences from roots reggae and dub, unique horn lines and guarantees a relaxed dance evening.

In 2019 Radicle wants to write new songs and they will perform at different festivals. Keep an eye on our website for news!