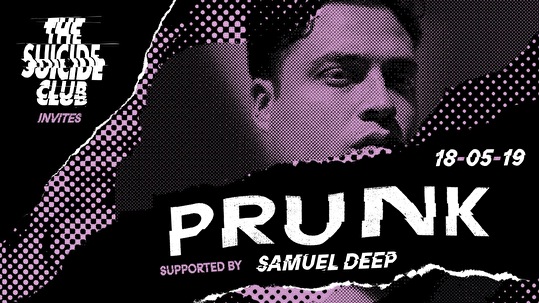 The Suicide Club invites Prunk and Samuel Deep for an intimate night on the dance floor. Minors will warm up the room so you're ready for a full night of house.


x Prunk x
DJ/producer Prunk is working at his own pace, but this doesn’t mean he’s taking things slow. His label PIV, which he started in 2015, has been steadily releasing EP’s, like his own production ‘Sexy Brasil’ that was released on the imprint in the spring of 2016. Together with his sparring partner Chris Stussy, Prunk released the ‘Material’ EP on EWax in the winter of 2016 and the two also released ‘The Machine’ EP that came out on the notorious Nervous Records and EP’s on Moulton and Innercity Records. These EP’s caught the attention of vocalist Alex Mills, who you can hear on Miguel Campbell’s hit Something Special. Prunk and Mills hooked up in the studio with No Cure as a result. Other labels Prunk has released records on are: Electronique, City Soul and King Street.

Next to producing Prunk is a resident dj for STRAF_WERK, he is a regular at DGTL and Jenja (Bali) and has played in Monaco, Barcelona, Zürich, Lille, São Paulo, Ibiza and at Awakenings Festival. His warm and sexy, but always dancefloor orientated and uplifting sound that finds its influences in artists like Kerri Chandler, Djebali, Mark Farina and Mr Ks is definitely attracting attention from promoters.
https://soundcloud.com/prunk

x Samuel Deep x
Sylvestro Tjon Sack Kie aka Samuel Deep is a young house-DJ and -producer, born and raised in Utrecht. He is the founder and co-owner of SlapFunk, an infamous party host and label. As a matter of fact, the first ever SlapFunk party was held to celebrate his birthday. SlapFunk parties became more and more popular throughout the year, but after winning the Metro DJ Contest things went really fast for this talented artist. Today he really have claimed his spot in the Dutch scene. If he’s not playing parties, Samuel spends most of his time crate digging. Black gold is pretty much the love of his life and his collection is steadily growing.
Samuel Deep owes his short but successful career to modesty, dedication and ambition. If there‘s anyone out there who knows how to rock the crowd, it’s this guy. Wherever. Whenever.
https://soundcloud.com/samuel-deep

.
His DJ career started in 2014. In four year’s time he performed at many various events in nightclubs of Latvia and Holland.
In 2015 he released his first deep house track on Barselona Tech House Label, which became famous in their own genre. Now he is working on releases with Dutch and international artists to improve himself with music production skills. His dj-sets filled with groove sounds help you to plunge into dance atmosphere.
https://soundcloud.com/minorsbeats

▲▲▲▲▲▲▲▲▲
C L U B T A B L E S
On Saturdays you can reserve one of our Club Tables. Treat yourself to bottle service and guestlist privileges.