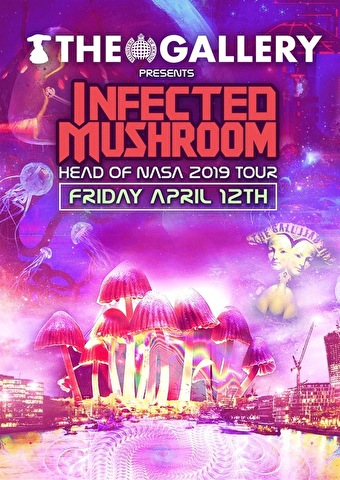 After a ground-breaking debut for The Gallery in 2014, plus having since made regular appearances to an adoring crowd - INFECTED MUSHROOM make a triumphant return to Ministry of Sound. This FIRST LONDON SHOW OF 2019 is especially conceived to showcase new album ‘Head Of Nasa,’ a project which IM duo Erez and Duvdev described as “a psychedelic journey into space!”

After a release towards last year’s end achieved widespread acclaim, the LP immediately hit the summit of iTunes’ album chart – indicating approval from aficionados within all musical genres. The album features seven tracks all of which are earmarked for The Box, crowning a DJ SET that proudly acknowledges a history rooted in the ‘Psy’ domain. However with a wide ranging ethos, Infected Mushroom recognise The Gallery for its open minded clientele – hence always playing a more eclectic set compared to other venues around the world.