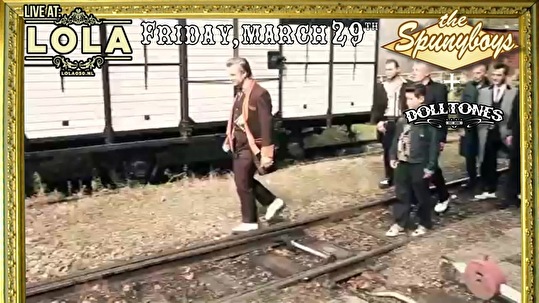 The Spunyboys
Two words to best describe what Spunyboys music is all about would definitely be those on their record : Rockabilly Legacy. Formed in 2006 in northern France by the brothers Remi (Double bassist, singer) & Guillaume (drummer), the trio gets his definitive line up in 2011 when Eddie (guitar) join em. The Spunyboys use the same ol' ingredients, such as Hillbilly music & 50's RNB/Rock N Roll, to make that explosive cocktail called Rockabilly. The Spuny boat ain't sailing only the Mississipi (New Orleans, Memphis, +Chicago) to get influenced, since he reach the River Thames, surrounded by british rockers too. That is why you can find some Cliff Richard / Crazy Cavan / Flying Saucers covers... in their set right after some Carl Perkins / Ronnie Dawson / Little Richard or Johnny Horton gems between Spuny songs.
Already 800 gigs in 2016, the Spunyboys spend most of their time on tour (through 15 countries in more than 300 cities). Fulfilling their dreams, sharing woods with their idols (from 50's to 90's) in their favorite rockNroll weekenders festivals such as Hemsby/Screamin', Wildest Cat In Town or Viva Las Vegas in 2017!
The band was born and raised on stage through bars and festivals (everybody will get the feeling in their songs "Don't Ring The Bell" or "Honey Hides The Bottle"), surrounded by wild rockers. That is why Spunyboys has to be approached first as a live experience. Three rockin'boys connected on the same motor called rock N roll share their passion with the audience and no one will be immune cause the Jive is infectious. Check their song : "Bop For Your Life"!
The frontman Remi hit the stage to wake you up and you may see him running behind you during the show while his partners set the woods on fire : "Trouble In Town" ("and the gang's to blame!")

The DOLLTONES,
have been rockin' it around the clock since 2012 and have never shown any sign of slowing down.
prepare for axperience musicians that will treat you to a good ol' bag of Rockabilly, Rock'n'Roll and a couple of Honky Tonk Classics!

Filling up the Gaps will be DJ Hyst Erica to keep your feet moving all night long!