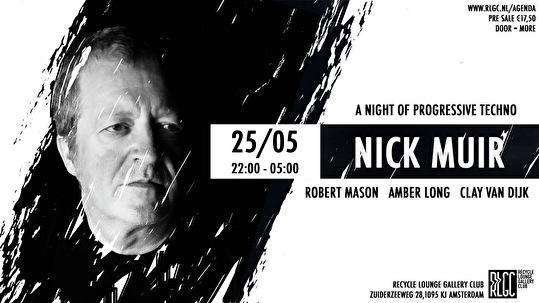 Line-up A Night Of Progressive Techno

Nick Muir, Amber Long, Rober Mason and resident Clay van Dijk will do what they do best: treat you to an unforgettable night.
→ lees meer
Get ready for a night of some serious Progressive Techno!

Nick Muir, Amber Long, Rober Mason and resident Clay van Dijk will do what they do best: treat you to an unforgettable night.

Nick Muir:
Although he is no stranger to Amsterdam, this will actually be his second gig ever in Amsterdam.
Don’t miss the chance to come and hear the man behind so many ground breaking and genre- defining original tracks and remixes from the Bedrock label, being, as he is, the only man John Digweed has ever produced and written music with.

Amber Long:
Toronto-based Producer/DJ/Vocalist, Amber Long, has trademarked a sound that is svelte and uniquely hers, performing live for nearly two decades. s a DJ, she is passionate and animated, demonstrative of someone who loves their work intensely and tears up dance floors across the world.

Robert Mason:
Canadian electronic music producer Robert Mason, when not in the studio finishing his next track, is working on his dance music label, Modern Agenda. Experimentation in analog electronics and computer‐aided music production has led to various releases on renowned record labels globally.

Clay van Dijk:
Clay van Dijk is a progressive DJ/producer who works in collaboration with a wide variety of top producers from all over the world. He combines deep house, progressive and melodic techno into a hypnotic and intense DJ set. His speciality is creating an atmosphere wherein the audience will be taken to a different musical level. He will take you on a rare, extraordinary and psychedelic musical trip in to the deep space of the progressive underground.

Tickets go on sale on Monday 25th of February.