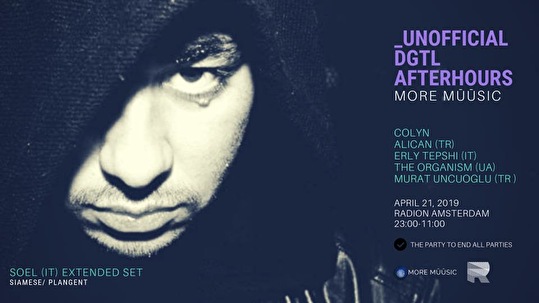 Unofficial DGTL After w/ SOEL, Murat Uncuoglu & more
We believe you haven’t finished partying yet, after your DGTL weekend. Because we have a very uncommon line up stacked. As always questions arise: “𝐖𝐡𝐞𝐫𝐞 𝐢𝐬 𝐭𝐡𝐞 𝐀𝐅𝐓𝐄𝐑𝐏𝐀𝐑𝐓𝐘!?” Right!

You want to be part of something 𝙪𝙣𝙞𝙦𝙪𝙚? You love 𝐀𝐟𝐭𝐞𝐫𝐩𝐚𝐫𝐭𝐢𝐞𝐬 more than regulars? You love talented Producers/DJ’s and have been following their work for a while or just curious to the faces behind those sounds you already heard before. You love to be surrounded by people who love 𝐦𝐞𝐥𝐨𝐝𝐢𝐜 𝐡𝐨𝐮𝐬𝐞-𝐭𝐞𝐜𝐡𝐧𝐨- 𝐞𝐭𝐡𝐞𝐫𝐞𝐚𝐥 𝐭𝐞𝐜𝐡𝐧𝐨 just as much as you do? Than welcome to MORE MŪŪSIC!

𝐈𝐧𝐧𝐞𝐫𝐯𝐢𝐬𝐢𝐨𝐧𝐬
(Â𝐦𝐞 & 𝐃𝐢𝐱𝐨𝐧)
→ lees meer
𝐌𝐎𝐑𝐄 𝐌ŪŪ𝐒𝐈𝐂 aims to bring you local and foreign electronic music DJ’s/Producers to Amsterdam who are about to RISE into rockstars anytime soon! Talents we talk about as of NOW. Tracks we already know, going viral and supported by the big guys (𝐒𝐨𝐥𝐨𝐦𝐮𝐧, 𝐓𝐚𝐥𝐞 𝐎𝐟 𝐔𝐬, 𝐌𝐢𝐧𝐝 𝐀𝐠𝐚𝐢𝐧𝐬𝐭, Â𝐦𝐞, 𝐃𝐢𝐱𝐨𝐧). Talents we believe deserve much 𝐌𝐎𝐑𝐄 visibility! Some of them never even played here before. We want to deliver the best Afterhours experience to you & with you, the TRUE music lovers. Bundled with a top notch soundsystem, out of this world visuals, more (eargasmic) music and the inclusive feels. More talents, More of YOU, more of US. Together we are so much MORE MŪŪSIC.“

We believe you haven’t finished partying yet, after your DGTL weekend. Because we have a very uncommon line up stacked. As always questions arise: “𝐖𝐡𝐞𝐫𝐞 𝐢𝐬 𝐭𝐡𝐞 𝐀𝐅𝐓𝐄𝐑𝐏𝐀𝐑𝐓𝐘!?” Right!

You want to be part of something 𝙪𝙣𝙞𝙦𝙪𝙚? You love 𝐀𝐟𝐭𝐞𝐫𝐩𝐚𝐫𝐭𝐢𝐞𝐬 more than regulars? You love talented Producers/DJ’s and have been following their work for a while or just curious to the faces behind those sounds you already heard before. You love to be surrounded by people who love 𝐦𝐞𝐥𝐨𝐝𝐢𝐜 𝐡𝐨𝐮𝐬𝐞-𝐭𝐞𝐜𝐡𝐧𝐨- 𝐞𝐭𝐡𝐞𝐫𝐞𝐚𝐥 𝐭𝐞𝐜𝐡𝐧𝐨 just as much as you do? Than welcome to MORE MŪŪSIC!

Situated in Amsterdam-West, RADION is the creative hub where art, music and food collide through our venue's various areas: The club, the cafe/restaurant & the exposition.

Soel Sadiki, was born in the gray and bustle Milan. SOEL’s voyages into production started early on in his youth as he experimented with samples from his father’s record collection as a means of self-expression. He drew inspiration from different sources and explored genres, which is reflected in his sets – constructed as a journey that includes a mix of techno and minimal sounds blended with dark vocals.

Murat Uncuoğlu began his professional music career as a DJ in 1987. His ever-increasing urge to become a professional DJ and producer, took Uncuoğlu to what was then the heart of electronic music, London. He worked as both a DJ and a sound engineer in London. Upon return to Istanbul he gained residency at Club 2019 and later co-founded Radio 2019. Having attained national stardom and respect by both his fans and colleagues, Murat Uncuoğlu has turned his attention to the international music scene. He started his own record label ‘Isolate’ with Alican in 2017. Started a high end club
‘M O D U L E’ in Istanbul where the biggest DJ’s of the moment play. Hosting Diynamic Festival Istanbul with his Isolate. His latest release ‘Thoughts’ on 𝐃𝐢𝐱𝐨𝐧’s ‘𝐈𝐧𝐧𝐞𝐫𝐯𝐢𝐬𝐢𝐨𝐧𝐬’ Secret Weapons 11 and soon ‘Trees of Light ‘ EP on 𝐋𝐞𝐡𝐚𝐫’s ‘Multinotes’ label is something to be really excited about. His music gains a lots of support by 𝐒𝐨𝐥𝐨𝐦𝐮𝐧, 𝐋𝐞𝐡𝐚𝐫, 𝐀𝐍𝐃𝐘 𝐁𝐑𝐎𝐒 (𝐃𝐢𝐲𝐧𝐚𝐦𝐢𝐜) and Â𝐦𝐞, 𝐃𝐢𝐱𝐨𝐧 (𝐈𝐧𝐧𝐞𝐫𝐯𝐢𝐬𝐢𝐨𝐧𝐬) to name a few. Berlin & London know Murat, it’s time for Amsterdam its own ‘𝐈𝐧𝐧𝐞𝐫𝐯𝐢𝐬𝐢𝐨𝐧𝐬 gurus’ to meet him!

Colyn is an Amsterdam-based DJ and producer. His style is centered around but not limited to techno.

The inspiration for his music comes from dystopian and futuristic visions and emotions. In the summer of 2018 Colyn launched his ‘Binary Choices’ LP on Tentacles Recordings. December 2018 the EP ‘Passengers’ was released on Infinite Depth. This EP consists of two originals and accompanying remixes of Erly Tepshi (who will play too) and Esoteric Cercle. The package has received early support by the likes of 𝐓𝐚𝐥𝐞 𝐎𝐟 𝐔𝐬, 𝐊𝐞𝐯𝐢𝐧 𝐝𝐞 𝐕𝐫𝐢𝐞𝐬 𝐚𝐧𝐝 𝐅𝐢𝐝𝐞𝐥𝐞𝐬.

Colyn is an upcoming Dutch talent with a melodic techno imprint, who will take you on a musical voyage!

Inspired by the new wave of electronic music, deeply, emotional and full of vibration.
Atmospheric pad's and synth's with warm basses characterize his productions.
The contrast between darkness and brightness but with all the gray tonality! That Dido remix we've been all obsessed about "The Day Before We Went To War". Deep, some dark and vocalistic tracks that takes us away to far away. Highly impressed we are. His music is being supported by the likes of 𝐓𝐚𝐥𝐞 𝐎𝐟 𝐔𝐬, 𝐀𝐝𝐫𝐢𝐚𝐭𝐢𝐪𝐮𝐞 𝐚𝐧𝐝 𝐅𝐢𝐝𝐞𝐥𝐞𝐬 and many more. Erly is going to take you on a beautiful journey!

Starting the career far away in 1999 as DJ Alfred, he managed to come a long a way from the young resident of the top venues in Kyiv to the successful sound producer. In 2013 Alfred decided to leave the boring mainstream sounds and started to experiment with the sound attracting young musicians, singers, sound engineers to his productions and started his new alias The Organism.
In the end of 2017 his ambitious work has given the first feedbacks from dancefloors guru Solomun. Nowadays The Organism is known far away from Ukraine, his tracks are played at multi-thousand festivals and the best world clubs by such artists as 𝐒𝐨𝐥𝐨𝐦𝐮𝐧, 𝐃𝐢𝐱𝐨𝐧, Â𝐦𝐞, 𝐃𝐉 𝐓𝐞𝐧𝐧𝐢𝐬, 𝐃𝐞𝐧𝐧𝐢𝐬 𝐅𝐞𝐫𝐫𝐞𝐫, 𝐀𝐧𝐝𝐡𝐢𝐦 and many others.
His track ‘Reflection’ which was out on Disco Halal, entered top 10 of Melodic House & Techno genre only after 10 days of being released receiving a support from many DJs worldwide.

Alican Yüksel, got into the electronic dance in 2000, producing drum & bass and breaks tunes. In 2003 Alican had a chance to meet Murat Uncuoğlu, one of the ambitious names of Turkish electronica scene. With Murat, they have set up a label and events company 'Isolate' which features their own tracks, tracks from the hottest artists in Turkey and around the globe, and tracks by respectable artists in the dance scene. Also, Alican has been hosting a weekly show on the largest and pioneering Turkish radio station, Future Generation, also known as FG 93.7. He just released his EP “Magazine” on Isolate which is greatly supported by 𝐒𝐨𝐥𝐨𝐦𝐮𝐧, 𝐃𝐢𝐱𝐨𝐧 and Â𝐦𝐞. If we need to categorize Alican than it must be something like this: he has a very refined tracklist choice and uplifting melodic techno flow.. to compare closely to Â𝐦𝐞 style. We can’t wait!