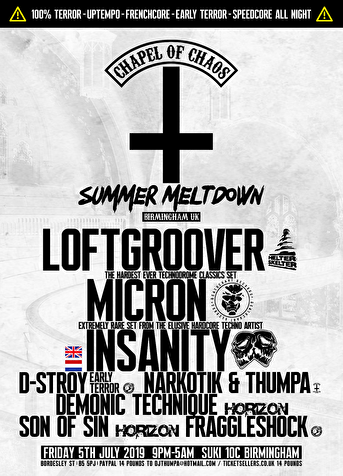 Chapel Of Chaos Summer Meltdown - Loftgroover, Micron & Insanity
For our Summer session we are going into complete Summer meltdown! 100% TERROR / UPTEMPO / FRENCHCORE / EARLY TERROR / SPEEDCORE all night. You have been warned!

LOFTGROOVER
(HELTER SKELTER / DREAMSCAPE / EVERYWHERE)
The devil himself! Loadsa guitars! FUCK THE DAILY STAR!
Loftgroover is a name which is synonymous with the UK Hardcore Techno movement since its inception. Lofty (as his friends and fans call him) career started out in the late 80s playing at a small London club run by Danny Rampling, and recalls probably his first Techno gig at the infamous ‘UFO Club’ in Berlin at this time. While he was in Germany he stayed at someones house and shared a room with a short guy who introduced himself as “Richard" they got on fine and a few days later "Richard" said...."hey, i'm going to a music conference to try to get my record signed...this one is for you".

"Richard" put the track in a record envelope and wrote these words on the front.

"To Loft..do not open until christmas...from....Moby!” Yes....that guy that Loft had been sharing a room with was Moby, and they remain friends to this day.

Tony's first vinyl releases were in 1992 on legendary Oldskool Hardcore label ‘Basement Records’ as Techno Bros (with Jack Smooth aka Ron Wells). Around this time when Breakbeats and Jungle was making an Impact in London clubs, Tony as well as playing this style (his way), found himself drawn to the European Techno sound from Belgium, Italy and Holland.

Tony was working in London- based shop 'Dancefloor Records' and had access to a wealth of exciting fresh music. He soon found himself making trips to mainland Europe to buy records for the shop direct (and himself) from the big distribution companies and record labels of the time like R&S, Big Time, Music Man, Hithouse and MidTown. On these trips he made friends and contacts with many of the biggest players in the industry. Loftgroover his slant on the emerging Hardcore and Rave sounds at the original parties such as Energy Street Parade (Switzerland), Biology, Knowledge, Sterns and The Rocket.

Loftgroover has always has had a unique and creative tune selection and mixing style, with an arsenal of exiting new harder music at his fingertips. Lofty's style evolved as did the scene and he quickly found himself not through intention one of the hardest Djs on the circuit. As Hardcore and Techno grew in popularity Loftgroover sets stood out from his peers earning him a massive following in the UK with regular appearances at every major event such as Helter Skelter ‘s Technodrome (Resident), Dreamscape (Resident), Rezerection, Judgement Day, Steam, Death Row Techno, Nosebleed, Vibealte, the Fubar, Fusion, Kinetic and many more.

In 1995 Tony started and released (with Vince Watson) on his own record label 'Redhead Records' under various guises such ‘Agent Loft’ & ‘The Mania’c, ‘Zeed’ & ‘The Red Team’. The label had 5 Releases including remixes of his famous track "Kneel Before Me" by the likes of Lenny Dee, D.O.A and Alex Reece.

In 1997 Loftgroover found himself the unwilling focus of a Daily Star front page "scoop" about "Nazi gabber hell" menacing Britain. The Star printed a badly informed article falsely linking Gabber / Hardcore Techno music with neo nazism and white supremacy. Something which in fact there has never been a link in the UK. Loftgroover's names was mentioned automatically being one of the most popular Djs about. The article writer obviously did not bother to do his research and failed to notice Loftgroover was in fact black.

In the late 90s Loftgroover's BPM's were getting faster and beats more furious. Lofty had started to incorporate screaming guitars and dropping full on Death Metal tracks by bands such as ‘Morbid Angel’ in to Dj sets at raves. Loftgroover style was being called 'Speedcore' and in terms of Djing he was one of the leaders in the genre. In 1998 Lofty was asked to compile and mix a double CD UK compilation, one of the first and only major releases of this kind of music in the UK. The CD titled 'Speedcore' featured key Gabber, Hardcore Techno and Speedcore tracks from 1993 til then.

Throughout Loftgroover's career he has played to crowds of 40,000 but he has no ego and is just as in his element playing in a small underground club. Tony like all pioneers loves good music and as with all good Djs loves every minute of being behind the decks.

Tony was also part of the trio that was the techno team known as "Knowledge" with Colin Dale & Colin Favor and I believe at the time he was managed by Carl Cox.

It is unheard of for a Dj to have crossed and joined so many musical boundaries but he (Tony) has. And as usual he always he tends to play tracks that nobody else plays.

Named as one of the top 20 Dj's to have influenced the music scene (DJ mag) and voted best foreign DJ (In a Swiss poll at streetparade 94) are among honours bestowed upon him.

Loft has a massive worldwide following and an abundance of friends in all genre of music.....it would literally take weeks to write everything about him. We finally get the devil himself at the Chapel and he is bringing only his hardest records!

MICRON - IRRITATIONAL IMPULSES / DEATHCHANT / THE THIRD MOVEMENT
Hugely versatile artist from the home of hardcore techno Stoke On Trent, releasing UK Hardcore Techno, Industrial, Speedcore and Frenchcore for over 15 years. Owner of the Irrational Impulses label and releasing on major labels such as Deathchant (Hellfish, UK) and Psychik Genocide & Neurotoxic (Radium, FR). Has also shown his versatility with slower industrial releases on The Third Movement (Promo, NL) and mental speedcore on Perdition Records. We are extremely excited to get Micron at the Chapel as he is famously illusive, regularly turns down gigs and has not played in over 10 years. His BRAND NEW material can be listened to and bought here - https://micron1.bandcamp.com/

INSANITY (NL/UK)
(OFFENSIVE RAGE / MEGARAVE)
Insanity are a duo act bringing you uptempo from the underground, they will hit you with heavy kicks and nasty screeches that will bring you to insanity! Hailing from the UK & Holland, they have releases on Offensive Rage, Megarave Records and more.

There's a lot more to come from Insanity, they have planned collaborations with MBK, Lunakorpz, DRS, Blaster, & Yunke .... Expect a lot of releases this year on Offensive Rage and Bounce Back Records. A highlight this year was playing at the legendary Megarave festival. Personal favourites of Chapel boss Thumpa, we are mega excited to get this gruesome twosome in to destroy your brain with mind melting kickdrums galore!

D-STROY - EARLY TERROR SET
(RIGORMORTIS / UPROAR / VIBEALITE)
D-Stroy started listening to Uprising tapes throughout his school years and was slowly drawn to the harder sounds,
Becoming a big fan of Scorpio, Clarkee, the DJ Producer, Jay Prescott & Lomas. Started collecting records back in 1999,
specialising and concentrating on rare and Hard to Find music on vinyl, Used to run the online record store Hardcore Distortion, spent many years selling and trading records throughout the world trading on ebay and then discogs. John played regularly around the Yorkshire hardcore scene since 2002, always pushing the harder styles, in 2006 he started to play at many of the North events hosted around the country.

He played at many of the major rave promotions in the UK including HTID, Ravers Reunited, Summer Sensation, Uproar, Species and more also held a residency at Rigomortis for 10 years. For this special set we are going back in time for a late 90s into 2000s terror set from one of the most talented pure DJs in the country!

NARKOTIK B2B THUMPA
(CHAPEL OF CHAOS / RIGORMORTIS / HTID / HARDCORE HEAVEN)
For this first ever b2b playing new music Chapel boss Thumpa and long time friend Narkotik will go back 2 back for only the 2nd time, playing brand new terror & hard uptempo. Although they live at opposite ends of the country, their start in music could not be more similar. Heavily influenced at a very young age by HMS & Loftgroover tapes, they have both gone on to to play at HTID, Uproar, Hardcore Heaven, Slammin' and Ravers Reunited several times as well as appearances throughout Holland. Two of the tightest mixers and hardest DJs in the UK in the scene go head to head to obliterate our church.

DEMONIC TECHNIQUE
(HORIZON)
Horizon’s Demonic Technique has been building up an army of followers over the last 5 years with some ferocious mainstream & Frenchcore sets at places like Kiddstock Festival, Horizon Outdoor, Marc Smith’s Stomp, Ibiza Goes Hard and many more. Now second in command at Horizon and hugely responsible for keeping the North West’s hard scene busy along with Big Worm, we welcome back one of our most requested DJs to the Chapel for a pure Frenchcore set.

SON OF SIN
(HORIZON / KIDDSTOCK)
Son Of Sin (aka MC Octane) is a newcomer to the UK harder scene. Over the past year he has played at various parties across the country which include Horizon & Kiddstock Festival. He also has a regular mix series named 'Club 200' which includes his own tracks withs ome of the best uptempo around. Expect high energy from this very promising producer and DJ.

FRAGGLESHOCK - THE FASTEST DJ IN THE UK!
(RIGORMORTIS / I HATE TRANCE / FRACTAL)
For the last set of the night we have drafted in the most extreme DJ we could think of. Playing throughout the mid 2000s at various parties, Mike took time out to become a lawyer (yes seriously) but has now returned to mixing the hardest and fastest speedcore and extratone ever made. When he's not mixing speedcore he can be either found at Britney Spears concerts, various sporting events or anywhere that has a bar...this man is very versatile. We are extremely proud to bring the king of intensity to the Chapel for a final lashing of guitars, screaming, noise and chaos that will fry your brain one last time. Fasten your seatbelts!

150 CAPACITY CLUB, TICKET PURCHASE STRONGLY RECOMMENDED AS THE LAST PARTIES HAVE SOLD OUT IN ADVANCE.

﻿Please delete this event as I've added it myself