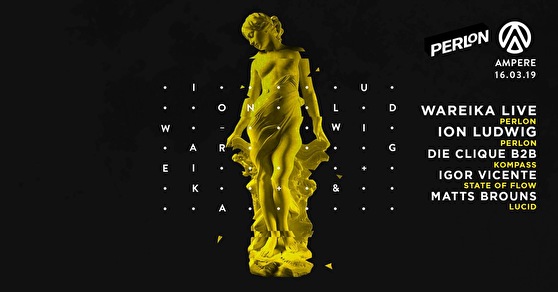 Wareika is more a band that has fun experimenting with electronic music but has a musical culture that goes well beyond it. Listen to any of their productions and you will discover atmospheres which refer to their own world and personalities.

Florian, Henrik, and Jakob have been at the forefront of electronic music for 10 years now, consistently developing and pushing their signature sound in every corner of the world with great success.

Their love for music is fundamental, a sacred value that leaves no space for anything pretentious.

They have been playing all around the world. Playing the best music with very little technical stuff. Playing electronic music LIVE simply calls for very special needs in the field of instrumentation.

Wareika´s next record features two collaborative remixes from Ricardo Villalobos and Thomas Melchior. Where the German trio´s original version tumbles and falls in and out of time, splaying out piano chords and synth lines, Ricardo and Melchior´s first remix strips things back considerably and tighten up the drums to the point where they resemble wound steel being plucked in time to the meandering repeated bassline.

The first signs of Ion Ludwig as a producer were brought to the world via a release on Butane’s Alpha house in 2006. Ion, however, possesses one of those unique stories of starting at such an early age, he was producing electronic music at the age of 17, having then his first release out at 21. Now, over 10 years on, his name continues to echo the representation of pure quality music, one which also shows that having a background as a musician certainly contributes greatly to such talent, dedication and wide recognition.

Ion Ludwig’s musical influences are very wide and not only have been marked by for instance his early encounters with playing acoustic guitar or African drums but equally, if not, more importantly, those acquired by his travels and the exposure to different cultures which contribute as major influences to his work.

Ion Ludwig moved from Leeuwarden to Amsterdam and from there to Berlin in early 2005, throughout the 4 years he lived in Berlin, while actively producing in the studio places like Club Der Visionaire and Weekend Club helped shape his live performances to perfection.
On labels like Alpha house, Stock 5, Resopal, Thema and later on Motiv Bank, and his own imprint Quagmire LTD he brought the intricate and sophisticated minimal house and techno records picked up by the masters of underground culture.

Special recognition needs to be given to a particular piece of work, his debut album ‘Free K Loudwiggle’ on his own imprint Quagmire LTD. This album is the result of 21 months’ work in Berlin then to finalize it, the mixdown and mastering process was done over the course of 2 months after moving back to his birthplace in Holland, Kring van Dorth.
The true artistic dedication with its attention to detail and beauty are so evident in this piece of work, not only for its wide musical diversity covering jazz, funk, disco, house and techno and its marvelous competency in production skills but also the entire ethos and artistic concept around it which tells us a lot about the artist and his dedication to art in its purest form. It was released to a limited 200 copies with the unique touch on hand-making all the artwork, record covers were manually printed and stamps were given to each side of each record.

Following on from such artistic statement a whole new focus takes place in 2011 where labels like Meander, Be Chosen, Tenth Circle, and Baby Ford's Trelik grow interested in his music. Critically acclaimed, his 2011 EP's make waves under the crème de la crème of electronic avant-guardists. This is also where his direction and style is defined for the coming years to go.

In 2012 his new conceptual Label Ugold Series start in co-operation with ‘DD Distribution’ Berlin. This is a result of him finding new ways to release his increasing explorations in sound under the focus of being an ‘introverted and impressionist’ producer of house and techno music. Working from his 'Ion’s Inn Studio' inside a medieval building he explores a vast expansion of retro-technical and modern electronic instruments enabling sound to be shaped beyond any hype.

On stage, his live performances take place with the eye and ear set on the musical 'horizon'. Combining drum machines and synthesizers with a laptop and recordings from older and newer work his sound radiates a never-ending story and energy.

Die Clique’s passion for electronic music began when house guru Moodymann released his “Shades of Jae”. Overwhelmed by this piece of dance music, he bought his first records and got himself positioned behind the turntables. As the years passed by, the enormous wave of tech house and minimal form Germany and the UK influenced him even further.

Nowadays it seems that this man and his bag of records are everywhere in Belgium. And there is a reason for that. It’s because Die Clique is armed with distinctive mixing skills, which he combines with great musical insight and an unseen hunger to spread it throughout the Belgian underground scene.