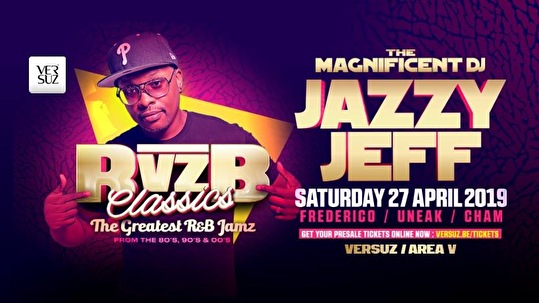 DJ “Jazzy Jeff” Townes was born in West Philadelphia and developed a love of music at an early age. Jeff was just 10 years old when he started spinning records at parties using his family’s basement as a training ground for his expert mixing. Since 1985, DJ Jazzy Jeff has wowed us with his flawless turntable skills, innovative production and musical versatility. From the success of “DJ Jazzy Jeff and the Fresh Prince” with partner Will Smith, to the critical acclaim of his production company “A Touch of Jazz”, Jeff proved time and time again that he would always be a force to be reckoned with. And he continues to represent with his solo projects, collaborations, mixtapes and live shows. His love of music shines through in everything he does. Over the course of his career, DJ Jazzy Jeff has achieved many accomplishments including a DMC Championship and multiple GRAMMY and American Music Awards and nominations. But he is a humble man who is still doing it as his 2002 hit said: “For Da Love of Da Game.”

Only a few of some iconic places where we went out in the 90's and early nillies for R&B and Hiphop music.

In 2002 Versuz' opened their doors as Belgium biggest and most innovated club. Through the popularity of R&B music the management decided to provide a room specially for urban music, the RvzB Room!! Till 2012 this 'room' was so popular that people came over from Belgium, Netherlands, Germany and France to visit the great atmosphere and music.
In 2014 Versuz opened it's brand new club and of course they created a new urban room called, Patron Room were the best dj's are playing a blend of new and old urban music.

On Saturday 27 April 2019 the 3th edition of RvzB Classics will take place at the Versuz!
And for this edition we go XL at Area V

See you at the PATRON ROOM XL (Area V)