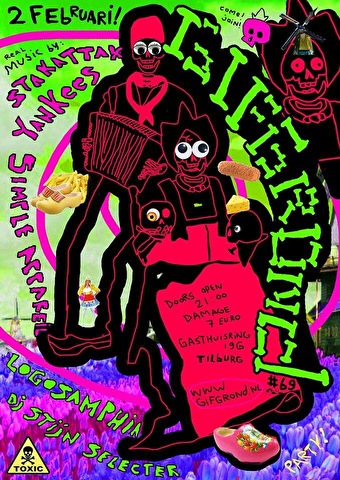 Jan Luijsterburg and Kees Hogenhout are making - at first hearing - somewhat awkward, confusing songs. How? By their idea about; recording = making! In the summer of 1984 they made the cassette YanKees at home.
After a 30 year break, during which Kees did a couple of memorable solo performances at Gifgrond, they are back, ‘ouder’ and louder. They sing about subjects, bingo, jenever and a strange duck, all in their native language: dutch.
https://deyankees.bandcamp.com

A weird ambient music duo from Brussels.
This new project needs a great amount of synthesizers and weird devices to transmit a continuous and immersive signal that could impaired cognitive functions. The transmission sometimes refers to sounds of the wilderness, or psychotropic drugs from the future, and can also try to communicate with your inner animal. Their first tape will be released in April 2019 on French label 'Da ! Heard it Records'.

Simple Appareil consists of Hubert Monroy and Nico Gitto. Both musicians are involved in the Belgian underground and alternative scene for a long time. Hubert Monroy is a sound engineer and currently play bass in kraut-noise trio 'Guili Guili Goulag'. Nico Gitto is a member of 'Why the Eye' and plays guitar in 'Facteur Cheval' and 'Zoft'.

Logosamphia (aka Kiwiboy) is the alter ego of Iranian / Dutch audio artist Sadra Hemati who has released over 15 albums on various international labels and in DIY form. His live sets are energetic, chaotic and contain home-made instruments, eastern influenced melodies and various pieces of fruit that he uses to create sounds with.
https://logosamphia.bandcamp.com

King of glitter Stijn/Sleeze/Sah Selecter was infected with house music in ’88 when he got his first turn up the bass record. He learned to play his first sets in Kadance, Tilburg, in the early ninetees. A few years later he and some lobotomized smelly dudes started the WirWar Soundsysytem. Expect some dirty disco and raw jacking madness!
https://soundcloud.com/stijn-selecter