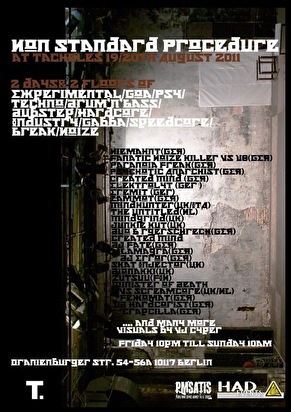 Start on Friday 10pm
till Sunday 10am

Looking forward to your set zutsuu!

Friday was just a goddamn terrific party imo! I totally enjoyed and hear great acts.
Maybe it was for me even a better party then the fupa itself. Great to see Skat Injector again, Junkie Kut, Jutsuu and other acts i couldnt recognize, like who was the fuckin excellent acid speedcore stuff doing somewhere between 3 and 6? Really who was that?! Totally down with that stuff.
Also veryyy cool to meet familiars and friends from all over europe and to meet new people!
Respect for the guys who did a speedcore truck on the parade, keep it up! And also again who was the guy playing the french speedcore / flashcore stuff near the end of the parade? With the Knibal records t-shirt on? That was fuckin awesome. MALERIA thundering thru the streets of berlin!

Can someone help me out with this?