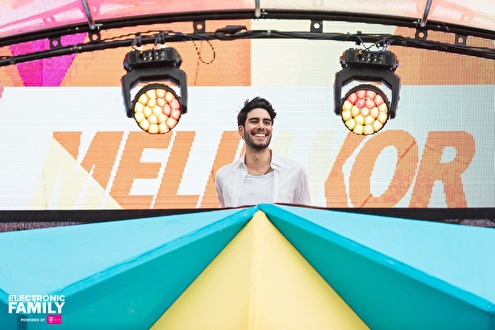 Electronic Family took a bold step by organizing a DJ contest for this year's edition. First prize? Opening the mainstage area on saturday. No "likes" involved, not a contest about inviting as many friends on Facebook. Just send your mix and show your skills, and Melih did. The winner of this contest is Melih Köroglu from Nurnberg, Germany. DJ name: Melih Kor. You might know him because he also played at the Future Sound of Egypt clubnight in Panama in April or for you might have heard one of his releases. Time to get to know Melih a little bit better!

You are a very creative person. Besides making music you also have some beautiful paintings on your website.
Yeah I'm drawing from a very young age already but maybe never developed it as good as my music though. The music was also always there since the beginning – I got blown away by the music of Mr. Oizo, Daft Punk and general electronic music at my early years (my sister told me). When I was 16 I finally bought myself a MIDI keyboard and got myself more into the production of music.

Do you have ambitions to combine the visual & music?
Yes I am doing it a bit, but not that actively. For now I'm focusing on my music first. I feel it needs more time and attention to get the best out of it and so there isn't that much time left for my paintings. For now I want to pursue my music ambitions first.

What are those ambitions? Where can we expect you in a couple of years?
That's a good question and I actually have thought a lot about it lately. I definitely have ambitions because otherwise you'll never get the most out of it. But it is not that I have goals that I NEED to reach to feel successful as an artist. I have some goals I would like to achieve, but if it isn't working out like I wanted to, it is not that I will feel very disappointed. It is very hard to plan something for the next years, let alone for five years, because unexpected things can happen every time. You change your mindset, another occasional thing happens. So I minimized my long term goals to only 2-3 to be realistic and not to be overwhelmed by everything. For me the most important thing is to be in the moment and develop from there on. Because NOW I have control about what I can do and that is always developing myself as an artist.

Your tracks are a blend of different styles. Some have more Deep House or Techno influences, other a bit more Trancy. What gives you inspiration?
Inspiration for my tracks just pops up at random moments and then I try to record some new melodies by singing and record it on my phone. On other moments I get my ideas from browsing through new sounds and samples. I also try to experiment, come up with something new and not necessarily inspire by other people. But generally artists who inspire me are guys like Eric Prydz, Armin van Buuren, Deadmau5 and his label Mau5trap, Daft Punk and labels like Drumcode and FSOE Excelsior. Besides that, the night gives me a lot of inspiration for example. Walking around at night, the street lights, the mystery, the atmosphere. That's also where my track "Night Rider" came from. I want to make music that I can listen during a drive and in the meanwhile enjoy the scenery, at night as well during the day. In general I think it is important not to sound like somebody else. I want to be myself, I can only be the best at being myself then by trying to be like another person. Because there are already those other persons, why should I be another one of them? I don't want to be the next Armin or Paul van Dyk, I want to be the first Melih Kor and bring something personal - bringing my true self out.

The names you've mentioned tells you have a lot inspirations outside the regular trance artists?
I don't want to put myself in a box. I want to have a free mind and make music that's close to my feelings. I take the best elements from all kinds of styles and combine it into something that is me. I don't consider myself as an trance artist, but just as an artist. I combine the elements of those styles and for now the result is something that can be considered closest to Trance.

For a relative new name you have played some nice gigs and released cool tracks. That's a great start, what are your next steps?
I have a collab with Maglev coming up and besides that there are a lot of unreleased tracks waiting for a release. I just have finished a big project and that's a bootleg I have made of Greece 2000. It is finished and now I'm looking if there are options to release it. But other than that, there is so much more to come.