Rude Rich and the High Notes 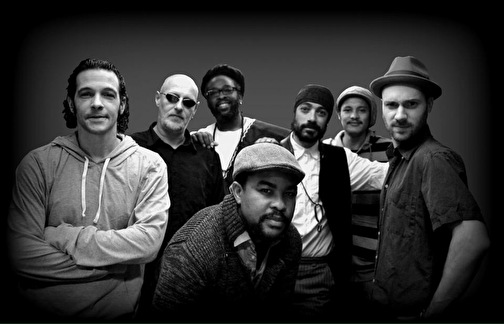 In 1999 they released their first album on Boombax Records: "The Right Track", mostly recorded live at the Chateau in Tilburg ( NL ). Due to a technical mishap some of the live tracks got lost and had to be replaced tracks. ( For information on releases see discography.)
The release of the album secured a lot of gigs for the band, especially in Holland and Germany. Highlights that year were Europe's biggest reggae festival "Summer Jam" in Cologne (D), and the renowned Lowlands festival in Biddinghuizen ( NL), starring dutch saxophone royalty Hans Dulfer. ( For an overview of all RR+HN's concerts see playlist.)

In 2000 the band performed at the Noorderslag festival in Groningen

, the annual showcase of the creme de la creme of dutch pop music and they began to steadily tour Europe. That same year saw the release of their 7" "Hey Senorita" on the German Grover records."
The band's second album, "Change the Mood" was released in april 2001. The album featured trombone legend Rico Rodriguez (the man who showed the Specials the ropes, among many other things. ) This was the start of a very fruitful collaboration with original Jamaican legends, resulting in the ongoing concert series History of Ska, Rock Steady & Early Reggae.
The first to be accompanied live by the High Notes was none other than the original King of Ska, Derrick Morgan. This took place in'200'2' at the Skafest in Rosslau. By coincidence this show was taped (two track! ), and the sound quality turned out to be so good that it resulted in the release of the album "Derrik Morgan meets the High Notes Live" on Grover. The second in line the same year was to be the Godfather of rock Steady, Alton Ellis, who started his career at Studio One and Treasure Isle, Kingston Jamaica, where he produced some of reggae's finest tunes.

In 2003 the High Notes invited Rico Rodriguez to Holland to do some shows. The band was free to choose the repertoire and came up with the classic roots album "Man from Wareika" which Rico hadn't performed live for some twenty-odd years. Again Derrick Morgan was invited for a small tour in Holland, Germany and Switzerland and during this period recorded another album with the King of ska in their newly built studio in Amsterdam, with a guest appearance by Rico.Together with Alton Ellis and Dennis Alcapone the band performed that year at Summer Jam and in Potsdam at the Skafest. While on stage in Potsdam Alton Ellis addressed the audience saying:" Usually when I turn around and see the band I see black people. With the High Notes I see a mix. Black and white together. No more black business!"

In 2004 they released their fourth album: "Soul Stomp 5', recorded at the High Notes Recording studio and released on their own Rude Rich Records. They played lowlands Festival for the second time, thistime also making an unplugged national radio appearance for '3 voor 12", VPRO. They played on home ground at the Amsterdam Uitmarkt, which is the kick off for the yearly cultural season in Holland.In the, by then, highly successful series of History of Ska, Rock Steady& Early Reggae ( part 4 ), they played a couple of shows with the legendary number one DJ from Jamaica, the great Dennis Alcapone.

In 2005 the Sunsplash Wiesen Austria festival brought together some of Jamaica's legends, such as Alton Ellis, Dennis Alcapone and U Brown, backed by the High Notes, now known as Europe's finest backing band. From Austria they went to Belgium with Alton Ellis and U Brown for the Hove Live festival.Winston Fix it" Francis was next to be brought to Holland ( History of Ska, Rock Steady and Early Reggae part 5 ). Mr. Francis was so impressed by the original sound of the band that he came back for more.

In 2006 they recorded a live DVD with Winston Francis at the Dutch Ska festival at de Melkweg in Amsterdam, including an extensive interview with Mr. Francis. In springtime they went to France to play at the Leoska festival in Leognan. Later that year they were asked to be the support act for the Legendary Famous Originators of Ska...the Skatalites. 'Their first 12", "MR Fix It'', by Winston Francis ( of Studio One fame ),was released.

In 2007 they headlined the Dutchska Festival again, this time playing a set that consisted of strictly Ska classics. The History of Ska, Rock Steady & Early Reggae part 6 featured the finest voices of rock steady. Leroy Sibbles and Barry Llewellyn, better known as the legendary Heptones. The DVD the High Notes shot with Winston Francis was released,a very happy occasion, and the band kept touring Europe, from Switzerland as main act at the Skarau festival, to Belgium, Reggae Geel, with Derrick Morgan.

The year 2008 brought a collaboration with guitarist extraordinaire Ernest Ranglin, who frequently appears at the Montreux and North Sea Jazz festivals. Playing his virtuoso, and rather more complicated than usual, reggae tunes was another learning experience for the band. The same year the High Notes finally released "Derrick Morgan meets The High Notes in Amsterdam", recorded in between gigs with the King of Ska. Late at night the band would return Mr. Morgan to his hotel after a show, and very early the next morning Mr. Morgan would summon the band to the studio, saying: Put the people in the studio man, we have work to do."
in 2009 the band decided that it was time to celebrate their tenth anniversary, although for people who pay attention and do the math this party came one year late. (That's how busy they were recording, rehearsing and touring.) And a party it sure was! The band had invited ex-member to do a guest appearance, so it became a true reunion of old friends. In addition some of the Jamaican originators that the High Notes had worked with over the years agreed to come along for the ride. The show consisted of three sets featuring Dennis Alcapone, Winston Reedy, Rico Rodriguez, Charles Organaire (who has played a wicked mouth harp on almost every ska tune from the sixties.), and Winston Francis. ( Rico and Organaire shared the stage for the first time in almost thirty years. ). Needless to say that it was a party that will be remembered for a long time to come, if not by the attending audience than certainly by the band members themselves.

The highlight of 2010 cannot be other than the High Notes' appearance at the Tokyo Ska Jamboree, at a beautiful outdoor venue by the foot of Mount Fuji, Japan. On invitation by the Tokyo Ska Paradise Orchestra the High Notes were flown to Tokyo just to do this one gig. But then, if you can make a couple of thousand of people on the other side of the globe smile and dance, nothing is too much trouble. Especially the ska- adaption if the Japanese classic "Suki Yaki" found great favour by the audience. Meanwhile things kept happening at the band's studio, rechristened the Gully Bank Studio. Tenor sax Tommy Tornado, who had been playing with the high Notes from before he came of age, recorded his solo album 'Sunrise" there. The album features guest appearances by Dennis Alcapone, Winston Reedy, Rico Rodriguez and Ernest Ranglin, and is backed, of course, by the High Notes.
The next year the band decided to take it a bit easier, just for a year or so. Nonetheless the next chapter of History of Ska, Rock Steady& Early Reggae brought the legendary voice of Ken Boothe to Holland. With this magical voice and charismatic personality Mr. Boothe brought the annual Amsterdam Reggae Festival in a most mellow mood indeed.

Also in 2011 the band decided to do something different. Instead of backing a well known artist they brought to Holland a young singer from Trinidad, Marlon Asher, doing gigs at Zwarte Cross and Reggae Ruigoord.

The year 2012 already saw the release of Tommy Tornado's second album "Coo| Down". An album with Winston Francis is to be released in England. And as you read this Rude rich and the High Notes are working on their new album "Tribute to the Greats-the Legacy"
Check the site for further developments.