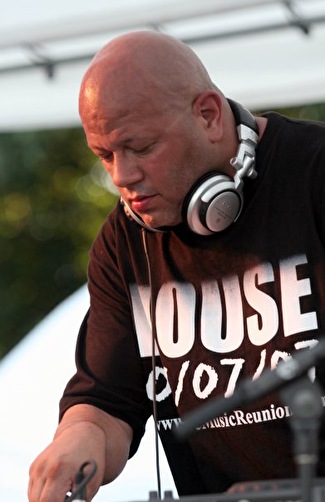 …A reception position at 'Trax', a local dance label provided a conduit of opportunity for Wayne to record his first track; 'Undercover' under the alias Dr. Derelict. With a keen ear and a finger on the pulse of the European club scene, Wayne's selection and promotion of such mega-hits as; 'Move Your Body' and 'No Way Back', arrested the attention of Jive Records, a London based label. He was then offered a position of A&R representative and thus began his 14 year tenor at Jive and an illustrious career in music…and that's no jive.

Citing the rich musical heritage of the Windy City and it's tradition of talent, Williams negotiated with Clive Calder, former CEO of the label, to set up a studio as a base of operation. He then signed Mr. Lee (a local artist) and released the debut single 'Get Busy', which became the unofficial theme song of the 'The Arsenio Hall Show'. Recruiting Hoola and K. Fingers (two Chi-town producers), Wayne went to work on several Samantha Foxx remixes and proceeded to scribble his initials in the book of musical history. Responsible for the reinvention of Fresh Prince with the seasonal classic; 'Summertime' that gave every listener a timeless nostalgic 'good vibe' to be heard at barbecues for years to come…

Fast forward to a backyard barbecue of particular interest where Wayne was interrupted from his paper plated fixings of chicken and potato-salad by the enrapturing sound of male vocals. He found himself a captive member of an outdoor audience to an unknown group with stage savvy, moves, and the type of polish that made 'The Jacksons' and the 'Chi-Lites' iconic… the group was R-Kelly and MGM. After a one year battle, Wayne finally convinced Jive to sign Robert Kelly… and the rest is history. Refusing to be confined to the context of R&B Wayne tested his mettle in the Hip-Hop arena by signing Mystikal who proved to be a future mega-star of 'Rap music'. His gift of vision and innovation is relied upon by many diverse Jive projects that include the likes of Britney Spears, Justin Timberlake, and Joe. When commenting on his accomplishments Williams acknowledges God, faith and belief as the preeminent forces in his life and adds, "I've been taught by the best: Clive Calder – The Vision, Barry Weiss – The Hope, and R. Kelly – The Truth

In his 2003 smash hit, 'Step In The Name Of Love', R. Kelly urges, "DJ. Wayne Williams, keep playing the music"; and he intends to. In January 2004, Williams celebrated his 30th anniversary as a DJ. Already immortalized on the pages of DJ History with acknowledgements in the literary publishings: 'Last Night a Dj. Saved My Life' and 'The History of House Music' for his contribution to the proliferation of that genre…the music keeps playing! Today as Senior Vice President of A&R at Jive Records/BMG… the tables have indeed turned… From being undercover to being on the cover… just check your CD collection.