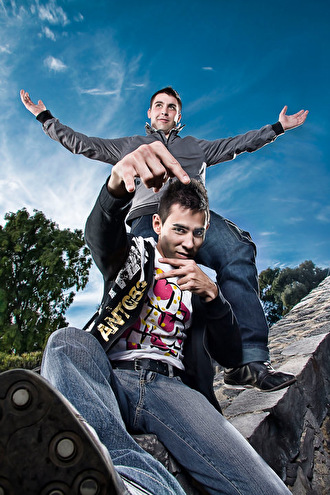 In late 2006, editing a canary productions cd's initiative "Bassboyz" which bears the name BASSBOYZ Vol.1 in which participates with two tracks Anthrax. Anthrax is involved in the End of Year 2006 in the municipality of Guía De Isora (Tenerife), where he cites a capacity of over 2000 people.
September 2007, are required by the Family "The Factory Records (Rep. of Georgia)" to join his group, and so do future projects with this group of & net label in the future that in 2008 and 2010, edited several tracks, in two references themselves. After this, Anthrax begins to break through national and international producers, providing its output beyond the island.
In 2008, Anthrax begins with right foot, editing at The Factory Recordings, and starting the project "Hysteria Records" along with Mystical Sound recording and stamp dedicated to drum n bass. "The DJ Shop" also form the group for its future projects,Anthrax participating a year later with two tracks in a limited edition CD, including also some issues with his pseudonym for productions of old skool / retro "NEURYGMA". (Www.myspace.com / neurygma).

2009, Anthrax began a good way to go, is published the first reference of the HRD seal with Anthrax, Mystical Sound, and Mata, as players receiving very good reviews from listeners and many downloads. "The dj shop" sold out "THE SHOP DJ Vol 1" Limited Edition. Anthrax is becoming better known outside of the labor of production, and are interested in new labels for its productions, such as "Genome Records"

in that mark his first track on vinyl currently in preparation for departure, " Dangerous New Age Recordings "(Uk), which subsequently edit a song in collaboration with his partner died, or labels like" Subculture Records (ITA) and thanks to a remix companion NICKBEE, preescriben in the Italian family, playing such people of the renowned theme Maztek (ITA) and other bettors, thus creating a slightly larger door to the outside. During the year pass through various events on the island. At the end of it, after calling the interest of national labels such as "XIII Fcktr Records, and have played in several events of the island, with big names like Benny Page club seven (Tenerife), or HYPE, Mampi Swift, FRESH, Phantasy, DEEKLINE, RATPACK, Northsiderz, ... including in the case of INNOVATION "The Tenerife Reunion" are called to click to Sofia (Bulgaria), with the help of "Genome Records" along with the crew of "Metafiziq Recordings" (BU), where he subsequently admitted in the family of the seal, making a good showing at the party and causing a good impression out, this causes Anthrax is one of the few producers of the islands have managed to click out of Spain in an event official ... However, before the end of the year, began a project with "Dangerous New Age" with its pseudo "NEURYGMA" with which in 2010 think the leap from the other side of the production to some repute.

Start 2010, and comes loaded with new features. "BF Records (GER), is interested in the production of Anthrax, and he and his fellow bluegoobling sale" ELEMENTS LP, with two subjects themselves, and two collaborations with Bluegoobling, and Kung (Granada). After that BF records in turn produces another free item, causing great reviews. Also come into play "Brain Krypled Records"

, a new seal of Florida, United States, where they think to face. Anthrax began a project in a radio insular, MM RADIO (www.mmradiocanarias.com) where held every Thursday, "DIGITAL STATION", a program dedicated to underground electronic music (Drum n Bass, Old Skool, 2 Step ...) getting more more fans to the genre, and listeners to the program ... "The Factory Records" makes theirs again bringing a two-LP SAMPLER Anthrax issues insitu. At the final of the year 2010 they go to Slovakia and play in two gigs, on Bratislava an Zlate Moravce, with a really good impression at the party vibes.
Finally, start 2011 with a good fresh notices, with forthcoming tracks in big labels as "Trust in Music" ( Ger ), Close 2 Death ( Uk ), Metafiziq Recs. ( Bg ) a new project born called "Live and Dangerous Records" ( UK ), and also some releases on Spanish free netlabel "Sick Brain Records"( SP )…

Around 2012, Anthrax make some differents tracks also for Close 2 Death / Genome Records / Dangerous New Age / Overtech Recordings and the new spanish Label Dephunked Recordings. They start some serious projects for big labels who ill be announced soon Also They take out some stuff on "Histeria Records" (SP) too, his label, and has some big projects into the label for the future with big names of the dnb scene, and fresh names of the scene too,. We infecting!...