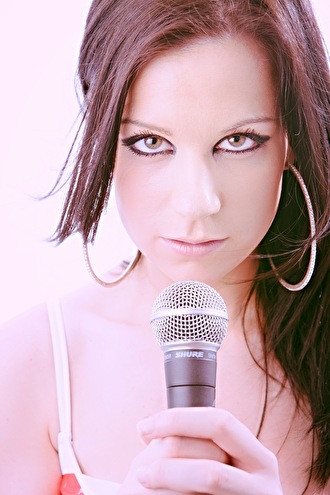 Sedutchion a.k.a Simone was born in 1987 in Eindhoven (the Netherlands ). After living there for seven years, she moved to Bladel, a small town in the south of the Netherlands. That is where she grew up with her parents, two sisters and one brother.
Because music was her one and only passion from a very young age, she decided to join a church choir for juniors. That is how she learned all the techniques about using her voice while exercising proper breathing techniques. Off course that was not enough for her and she also took piano lessons.

After the years, she had to stop attending the church lessons, but music always remained part of her life. She never stopped practicing singing at home, playing keyboard & writing her own lyrics.

Because she regretted that she had to stop the lessons, she continued trying to find new challenges within the music world. Those challenges were, singing at weddings and parties, and singing in pubs and discos. Finally, she had to sing at her brothers wedding, where everybody had their lighters in the air.
There was no way back, she had to get some singing lessons somewhere, and quick.

For the past five years, she took singing lessons, every week, when in March 2012 an unexpected thing happened! Someone asked on twitter if anybody was interested in recording some vocals for a techno track. It was an American DJ and Simone decided to give it a shot. After recording over and over again, trying to get it perfect, the track was finished and Sedutchion was born!

From one opportunity to another, she had to record some other vocals for hardstyle tracks, jingles and voice intros for different kind of radioshows and artists. Additionally, she had the opportunity to write her own lyrics.

Naturally, Simone is always looking for new opportunities in the music world, after all, we must not spend our life dreaming, we must live our dreams!