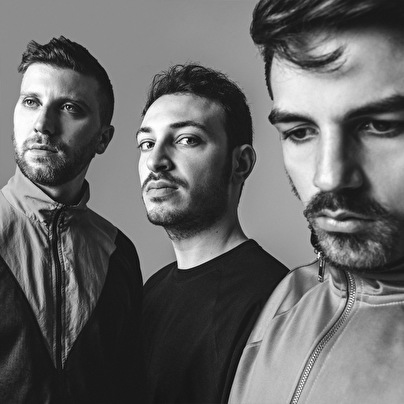 Andrea Di Ceglie, Fedele Ladisa and Luigi Tutolo are the Agents Of Time. The italian trio started this ambitious project in July 2013. Their first album has been released on a British label, Stem Records, in May 2014; the debut was soon followed by the landmark EP "Polina", on Jennifer Cardini's Correspondant, played and supported by the likes of Tale of Us, Dixon, Tiga, Agoria, John Digweed and many more.; soon after they've been pleased to remix Whomadewho's "Traces" in January 2015.
The trio's evolving sound, a fusion of strong elements that deal with electronic, progressive, techno and ambient, found home again in the French label leading to the release of the Emperor EP (May 2015) and the single "Lotus Flower" on Correspondant's compilation (June 2015).
The Agents of Time's live performance is characterized by the use of analogic instruments that make the product unique in its genre; their meticolous care for the details brought them around the world in more than 20 different countries, mostly playing live, often djing, and even with an orchestra (the Tonhalle Orchester Zürich), in just one year.

The future is unwritten and much more is reasonable to expect: nothing is left to chance, all is entrusted to time.