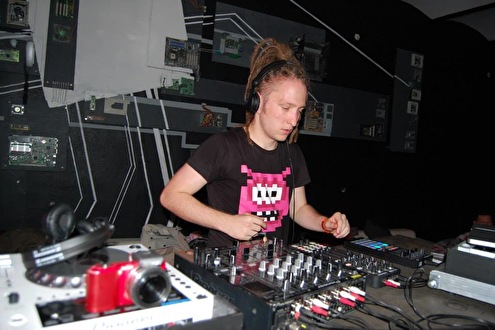 He started djing when he was 18, mixing House and Techno, until he met the "Psy World" a few years later, he starting to dedicate himself to this music style. Then changes everything, at the end of 2010 he moved to Budapest and become part of the Hungarian Club and Outdoor party Psy scene.
He have got many gigs in clubs and outdoor parties and festivals too, having great results he cooperated with Dj Hruscsov, since this he is a member of the Y-Production. After a year, he joined as a label dj to the Fractal Records

, what contains full of power nightpsy artists, such as Orca, Brainwash, Solaris and so on...

Comsat main style is Night/Hitech psytrance... very unique and powerful, night full-on with psychedelic tech sound touch. Something in between the morning delicious sounds and crazy pumping twilight night… to lift up the dancefloor and make an hypnotic crazy atmosphere to go beyond the public vibrations.

The other side project is totally different, show him slower side, more dreamy sounds with progressive beats. Mostly contains psychedelic ambient beats with a few influences of acid ambient, and uplifting themes as well.
His mind kept the same "journey feeling" and "freeforall thinking", as he likes to put it: "the music what i play is for everyone. For every soul with a heart beat, for every soul who want to get in touch with the soul of the music and the rythm of the beat.