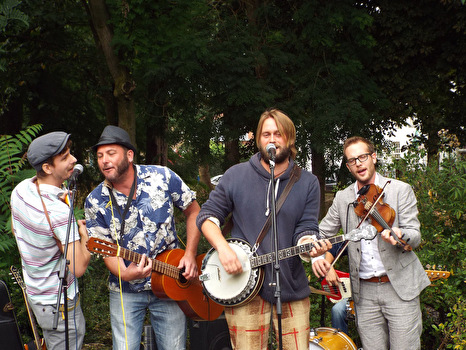 Lazarus Revival is an Utrecht based quintet. Their style can be described as versatile, ranging from folk to jazz to cajun and surf. Celebrating the roots and eventual export of eastern and mediterranean music, they make for a punchy, raw and welcome addition to the local music scene. With over 16 different instruments on stage and only 5 band members this creates a live spectacle that not only creates enjoyment, but inspires.

Lazarus Revival a band with a past.
→ lees meer
Lazarus Revival is an Utrecht based quintet. Their style can be described as versatile, ranging from folk to jazz to cajun and surf. Celebrating the roots and eventual export of eastern and mediterranean music, they make for a punchy, raw and welcome addition to the local music scene. With over 16 different instruments on stage and only 5 band members this creates a live spectacle that not only creates enjoyment, but inspires.

Lazarus Revival a band with a past.

Mike Clarke: Raised by devout Lutherens, on a farm, in the the south Saxony region of Germany Mike longed for a calling that would bring him closer to god. Early forays into divination. fortune telling, and animal sacrifice yielded little result. One day a goat from a neighbouring farm disappeared. Fearing retribution, Clarke fled to the hills. Exhausted and dehydrated after days of sleeping rough he ran into Bill Dynamite and his band of followers. Bill Dynamite had been hiding out in the surrounding hills causing chaos by randomly setting off explosions around and near local hiking tracks. Bill and his followers (now counting 7), were trying to scare people away from the local area in order to keep developers at bay.
Loud noises in the surrounding highlands by Bill and his group of followers were met with interest by the press, and their exploits were chronicled by reporter James Fucmy under the header. 'Bill's Hilly Bang Gang"
Mike plays saxaphone.... the goat was never found.

Boaz Burkunk: Decorated Navy Seal. His involvement in undercover ops in Serbia earnt him both a Silver star and the Navy Cross. The latter for pulling several comrades to safety who were under heavy fire. A New York Post report that in fact the combatants were actually being exposed to a barrage of Barry Manilo songs under high amplification were later dismissed. Burkunk always maintained that if anything it was Cool and the Gang. In any case the top brass came down on the side of sanity and he was fully vindicated. Cool and his gang are currently considered 'of interest" to the CIA.
Whilst there, as his mandate required, he became familiar with the local population. Working, among other things, as a noodle chef and a house painter, he befriended an old seamstress. Adrijana Slavica, although being blind and having only one arm, introduced him to the violin and the music of Niccolò Paganini. Finding the music soothing and an aid to forgetting the crys of battle, and realising the the blind old girl had a Stradivarius, he bought it for a piece of chocolate and never looked back,

Simon Flim: Marine Biologist, long distance skier, and adventurer was working with Jaques Cousteau on the, yet unreleased book 'What I Like About the Seas and Shit" for 5 years. As a gifted diver he was the designated camera man. Credited with discovering, among other things, the 'Big Balled Monkey fish" and uncovering the mating habits of the 'Jesus Crab". The latter, a deep water dweller off the coast of Grand Bahama, involved Flim diving to depths exceeding 200 feet, the heliox mix he used, proved inspirational. When returning to the dive vessel, the tonal contraditction of the rhythmic rotor blades, and his own high pitched communication with the bridge led to an epiphanic understanding of the effect of melody on percussion … so he said adieu to Jacques and headed for the nearest Goombay bar.
A brief flirtation with local beauty, and exotic dancer, 'Tiger Lily II" ensued. Her interest in the benefits of percussion to her act was all it took. Flim hung up his wetsuit for good, grabbed his passport, and ran away to played the drums.

Timo de Lange: After playing starting quarterback and being voted most likely to succeed by his classmates at Hopkins Academy, Timo went on to major in Political Science at Harvard University. He was snapped up as a speech writer for the George W. Bush. Administration. After realising that his words were for others to hear and for the president to repeat, he began modifying the text to effect chnage. One invasion of Afganistan and an occupation of Iraq later he felt his message was not getting through. The oval office time machine (we all know it exists) offered an easy out to 1976, where he found Jimmy Carter over his head. He quickly jumped at a chance offered by a rare Jim Henson visit to the White House and took a job writing for the muppets. Lines for Elmo came naturally, The Swedish Chef, and in particular Kermit. After masterminding the Sesame Street theme song and 'It ain't easy being Green" he felt his work was done. After, however, a chance meeting with Charles Aznavour who fell rather embarrasingly into his dressing room after tripping over a mandolin left absent mindedly by Gonzo inbetween chicken acts, he decided. 'Fuck this for a game of soldiers and headed to europe and fame".

Fulco Evers: Cleaner at graceland, not an unpleasant job, as being put in charge of the King's lavatory he only had to open the door occasionally and check for graffitti. Fulco was a gifted musician from birth but it was an unlikely meeting with Bob Seger who, while taking a tour of Elvis' residence, became seperated from the tour party. As chance had it both Dolly Parton and Arlo Guthrie were also on the same tour. The three had never talked citing deep rooted suspicion of each others music and a fear of creating an east coast triangle... plus it is rumored that Dolly had a thing for Woody, Arlo's father, and that Bob had been stalking Dolly on weekends. Aaanyway story goes that Fulco managed to trick them all into arriving in Elvis's music room simultaneously and, with the help of a .38 that Elvis used to shoot his sandwiches, wouldn't let them leave. After much grumbling the trio had knocked out two new numbers, 'Solid as a Rock", and 'The Final Countdown". Although no recording exists we can be certain that it sounded better than the eventual releases. At this point Fulco handed in his towel, threw his tip jar to the floor, stole a Gibson es-320 TD from the wall and went of to form a band.

We all met together at convention for 'ex navy seals, ex Graceland employees, ex underwater adventurers, ex muppet script wirters, and ex goat fanciers" held in the jaarbeurs in 2010. I can tell you it was a pretty small bunch, but still... wheat from the chaff we made it... and now you have the most goat killing, crab discovering, graceland going, muppet making, blackhawk down, kinda band you'll ever hear!