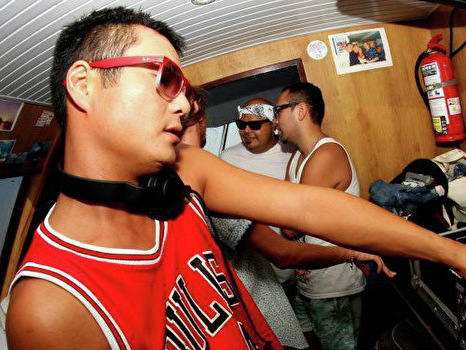 Ken has been an integral part of the UK Rave/House music scene for over 2 decades now, hard work, talent and several ear catching tunes has projected him onto the international scene, which he has taken to like a duck to water. Early on in his development he promoted illegal raves before becoming a resident for Birmingham based club Miss Moneypennys and Chuff Chuff. It was during this residency that Ken played alongside many of the world's finest spinners as well as hitting the road and touring the globe under the Moneypenny's banner.

Ken has gone on to become resident for numerous global brands as well as becoming a resident in various cities around the world; from the UK, Shanghai, Hong Kong, Brazil, Madrid and currently Ibiza, his ability to interact with people sees him at home no matter where he is.

This summer of 2013 Ken has help promote,play & program events & parties in venues such as Ibiza Underground where he was co promoter & resident with DJ Sneak for his much talked about Wednesday parties ,Vista Club, Sankeys,Café Del Mar,Eden,Plan Be & The Lost in Ibiza boat parties.

Ken spends a great deal of his time in the studio where his love for delivering his own beats to rock his dance floor has grabbed the attention, not to mention a spot in the record boxes/ wallets, of many of the worlds premier DJs. He can count the likes of DJ Sneak,Luciano, Dubfire, Loco Dice, Laurent Garnier, Carl Cox, Roger Sanchez and Nick Warren amongst his many supporters and his productions are available on all the major downloading sites.