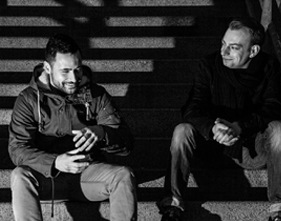 Joël Wacanno (aka Merdeka), has always had a strong feeling and an enormous passion for music. This passion erupted when he was just a little kid. After an experimenting crusade of 8 years it began to reap rewards in 2012. This same year he performed at the Solar Weekend Festival. Here he experienced the feeling to stand before a large crowd and realized that there was nothing else he would rather do than entertain a crowd to the fullest of possibilities. Since then, a lot has changed for him. as For example, he shared the stage with artists like Benny Rodrigues & Darko Esser amongst others. In his spare time he either dedicates his time to the musical sounds in his home studio or you can find him behind the decks, where his love and input lays in the dark abstract sounds. The distinctive sound of Merdeka entails a lot of tones as sharp as a blade.

Glenn Thompson has grown infamous over the years. Glenn has been an active member of the scene for quite some time now. He made his start as a DJ at Claydrum events in 2011. It has been a whirlwind experience ever since, in which he has shared the stage with artists like Tommy Four Seven & Ben Klock. Glenn's strong drive was not left unnoticed. His passion for deep atmospheric techno has entertained many crowds. He has a fixed goal dominating the evening: delivering that distinctive Glenn Thompson sound in the strongest of possible ways.

Joël and Glenn joined forces, using their passion, drive and goal together after they performed a very tight and strong back2back session at New Year's Eve 2013/2014. This night the connection and the passion for music between the two was so equal, that there was no other choice but to pursue their goals together... Thus VØID was born.

VØID stands for an atmospherical and industrial experience, our musical value lays in the subtlety of deep and dark sounds. We have a set goal and vision; to overjoy our crowds with our intense sounds. A plan set solid as a rock and we dare say: there is no turning back...