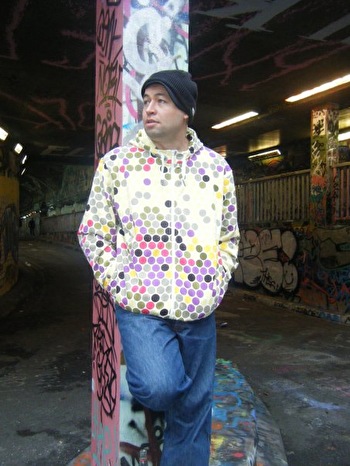 DJ Pilgrim, a name that graced many an event in the early 90's, based in Wolverhampton and still playing at today's major events, is one of the finest and most respected DJ's still in the Old Skool scene. Pilgrim first started getting into the music back as early as 1988.

"At this point i was into Hip-Hop in a big way and started going to a regular weekly night, at a club called The Lord Raglan in Wolverhampton. The latter half of 1988 though, the clubs music policy started to change into what was to be known as Rave".
→ lees meer
DJ Pilgrim, a name that graced many an event in the early 90's, based in Wolverhampton and still playing at today's major events, is one of the finest and most respected DJ's still in the Old Skool scene. Pilgrim first started getting into the music back as early as 1988.

"At this point i was into Hip-Hop in a big way and started going to a regular weekly night, at a club called The Lord Raglan in Wolverhampton. The latter half of 1988 though, the clubs music policy started to change into what was to be known as Rave".

When he crossed over to this he took his Hip-Hop technique with him, known as turntablism, which involved using his feet and elbows to scratch as well as using two copies of the same record, one slightly more ahead than the other to make a doubling affect, hence the record sounding like it has been re-mixed. This was used by the DMC DJ's like Cashmoney and Cutmaster Swift, who had influenced him in the earlier days but this was just one of many things that made him stand out from all other DJ's in the scene.

"For me, a DJ has to do something more than just mix two records together to gain respect. As most DJ's on the circuit can mix two records together but when it comes to scratching and doubling up, it takes a lot of courage and talent to perform that stuff live that's why I choose to do these things as not every DJ can, so this is what makes you stand out and sound different from the next DJ, which is why I highly rate DJ's such as Hype and Sy as the best DJ's on the scene mixing wise".

It was 1991 before he got his main break, performing at the opening night of the legendary Quest night in Wolverhampton, alongside the mighty Top Buzz as well as England's premiere female DJ Rap, and the night was a great success with an electric atmosphere which became the first major weekly club that ran every Saturday night. After this Pilgrim became a resident playing week after week, and as the club got more well known nationwide, so did his name with people making the trip to the club from as far away as Scotland. Soon after, Pilgrim became a household name across the UK in the 1992 - 93 era, headlining at some of this countries biggest and best events such as Pandemonium, New Age, World Party, New Dawn, Blast, Dance Planet, Helter Skelter, Total Kaos, Infinity, Kinetic, Mind Blown, Bangin Tunes, Dreamscape, Amnesia House, Fibre Optic, Milwaukee's (Equinox), Dance Nation, Fantazia, Summer Dance Festival, Vision, Entropy, Obsession, Adrenalin, Inter Dance, The Edge, Starlight, Heaven On Earth, Zest, Vibealite, Dance Trance, Reincarnation, Devotion, Innersense,Fusion, Tribal Gathering, Perception, Phobia, The Pleasuredome, Frequency, Destiny, Fun-de-mental, Labrynth, Diehard, Southern Exposure, Rezurection, Ardshock, Asylum (Bowlers), AWOL, Warehouse(Doncaster), Uprising, The Drome (Birkenhead), Sutra, Sunrise, Spellbound, Double Dipped, Planet Earth, Origin, Hypnotic, Evolution, Distruxshion and many more but the biggest crowd he ever played to was the massive Fantazia at Castle Donnington with an estimated 40,000 people there at which he played on the main stage and played the midnight set thus establishing himself as a mainstream DJ:

"People in today's scene would never have thought that I have headlined nearly all the biggest raves there have ever been in this country".


By 1994 he started to notice the music segregating and what used to be classed as Hardcore was now changing into the Happier Hardcore sound and the darker sounds as Drum 'n' Bass, each having their own individual DJ's, MC's and styles. As the scene became more segregated, Pilgrim found playing Drum 'N' Bass attracted a following that was not into the same good vibe as he was.

"With Drum 'n' Bass going through a dark, atmospheric style I found the music was reflecting onto the crowd, the atmosphere in the clubs was getting more dark and tense whereas on the other side, the Hardcore was happy and uplifting which also reflected on the crowd, thus creating a happy pleasant atmosphere, which is what raving was always about".

Soon after, Pilgrim became a household name across the UK in the 1992 - 93 era, as he played at some of this countries biggest and best parties such as Quest,

With club nights then kicking off all over the UK catering for individual styles, Pilgrim played at Happy Hardcore events for a while such as Pleasuredome, Vibealite, Pandemonium, Uprising, Labrynth, Fusion, Kinetic, Rezerection, Diehard, and many more.

After a while though he found the Hardcore music getting faster and harder so he took a back seat from the scene until about 1998 when he started playing more of the old original tunes from his favourite era of music 91-92, as there were so may class tunes about which to this very day still get played and still get a really good response, which brought along the emergence of his own Old Skool night he started in Wolverhampton called Reminiscence. Not long after that Pilgrim also hooked up with the guys from Flashback as they too, were ex Old Skool ravers, and were putting on small parties totally dedicated to the Old Skool classics to which he also became their resident DJ and since then the Old Skool scene has risen once again with all-nighters and club events dedicated to the music all over the country.

Pilgrim now likes to turn the clock back by playing at Old Skool events as he finds the atmosphere is always 100% at these clubs, and it not only brings back good memories but also the old faces that had left the scene. Pilgrim's plans for the future are to continue playing the Old Skool music he loves nationwide and abroad, and to continue being a big part of the Old Skool scene as well as becoming a first class snowboarder and winning the lottery.

This DJ is an excellent mixer, he knows what the crowd want and executes it well. He has been around for a long time playing alongside some of the original Old Skool DJ's such as Carl Cox, Stu Allen, Grooverider and Sasha with sets that justify him being just as good.